The Manchester graduate devoting his career to tackling climate change

Matt Petinaud, an Environmental Science graduate, has made his dreams of protecting and preserving the environment a nine-to-five reality.

This article is an edited version that originally appeared on the Manchester Evening News.

At the heart of The University of Manchester's values lies an ambition to build a greater Manchester.

With an impressive 45% of its graduates living and working within the north-west region, it's easy to appreciate why the University has such an impact. Through contributing to public services and ensuring local communities thrive and have access to brilliant education, healthcare services, and a blossoming natural environment.

The University is committed to improving the health of the natural world and has developed a range of innovations to reduce carbon emissions.

“I have always been passionate to give back to the places that have given me so much.”

Research pioneered at the University has set the standard for cleaner skies worldwide, delivered a Local Carbon Budget Tool to help local authorities manage their reduction targets, and delivered an emissions-busting graphene-enhanced concrete (‘Concretene’), which can reduce CO 2 emissions by up to 30%.

With so much work being done to tackle the climate crisis, it's no surprise that the University's students are inspired to do the same.

For Matt Petinaud, a recent Environmental Science graduate from The University of Manchester, his education has made his dreams to tackle climate change an everyday reality.

Matt, a Carbon and Energy Consultant at Envantage in Didsbury, said: "Climate change is a major problem, and it requires international collaboration, so for me to be able to contribute to that in any way, minor or major, is incredibly rewarding."

Matt grew up with a close connection to nature.

When he was little, his grandad would collect animal cards for him, which he would then organise in a big folder and teach himself about different species, their ecosystems, and how they could be preserved and protected.

Matt's passion for the natural world led to him pursuing a career that would allow him to protect the natural environment on both a local and global level.

"I have always been incredibly passionate to give back to the places that have given me so much throughout my life," Matt said.

"The most rewarding element of my job is the ability to help people in what we all know is the biggest global challenge we will ever face. However minor it may be at the moment, to be able to contribute to the changes that need to be made, is incredible.

"I hope my contributions can be even greater in the future, but for now I'm happy to be playing my part."

Climate change is a global emergency that impacts us all, but Matt hopes that with awareness and a collaborative effort to make a change, there's hope for our futures yet. 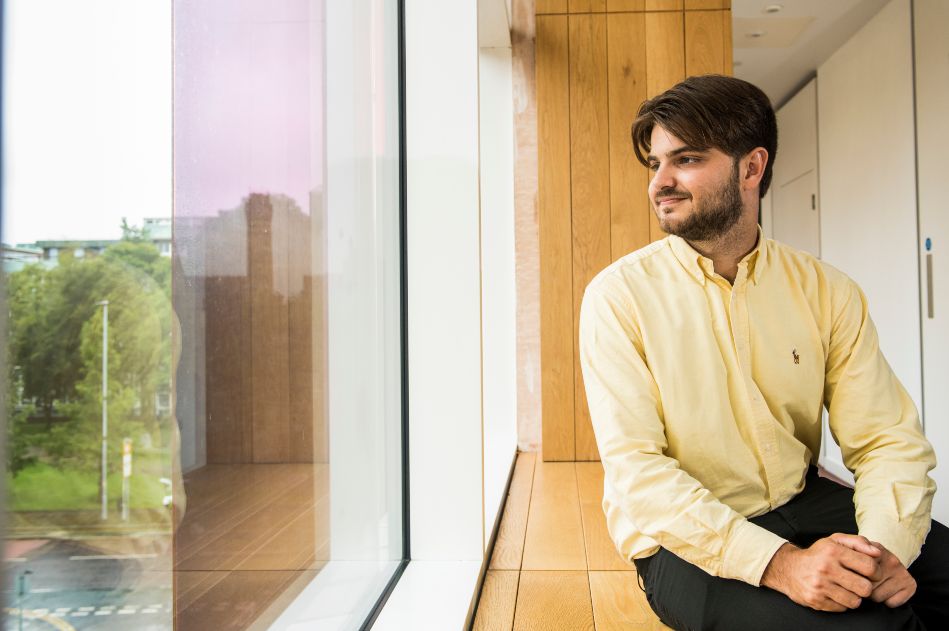 Matt's passion for the natural world led him to pursue a career that would help him protect the environment.

“Ensuring industries reduce carbon emissions has many benefits to the people of Greater Manchester, such as air quality. ”

A greener future for Greater Manchester

Ahead of the COP26 event in Glasgow this year, which will see world leaders come together to take decisive action on the climate emergency, Matt explained how his everyday role contributes towards a healthier, greener future for the people of Greater Manchester and beyond.

"As we all know, Manchester is known for its industrial and manufacturing background, it's what built the city in a way," he said.

"One thing that is becoming more evident is with increased production and output comes negative environmental consequences.

"So, in terms of my role and what I do every day, we work with manufacturers and industries to help quantify their energy usage and the associated carbon emissions that come with that and help to reduce them in the short and long term.

"How that helps benefit the people of Greater Manchester explicitly is that it helps typically, very intensive industries to reduce their carbon emissions, which has all sorts of positive impacts on things such as air quality, the things we take for granted.

"It helps make corporations aware of their emissions and make environmental considerations, going forward. We work with a number of clients on carbon disclosure projects, where we assist big companies as they quantify their carbon emissions and then work with them to help them assess how they can reduce their emissions in both the short and long term by making positive changes to every stage of their process, even down to how they package products."

While Matt has always been passionate about nature and the natural environment, he feels that studying at The University of Manchester has only served to add to this passion and turn it into a career.

Matt said: "During my time at the University, I was invited to take part in a competition, where you were asked to write 2,000 words on what oil and gas companies can do to reduce their carbon footprints.

"I started to come up with some ideas and formulated an essay, and then I was told I had won and was invited to take part in a summer internship with BP within their environmental department.

"During my time there, I helped them draw up risk assessments and environmental best practice tools for the future. For example, we were looking into how companies that transport goods via sea routes can unintentionally pick up animals on the bottom of their boats or on a piece of equipment.

"They are then, unwittingly, transported halfway across the world, and the animal is dropped into a completely new environment. In some conditions, the animal can thrive and even outcompete the native population. I was working on plans to help prevent that from happening in the future.

"This is a perfect example of how my education at the University piqued my interest in one area, but then it led to something else which has helped me become a better-rounded environmental professional.

"The University has helped me to gain contacts from an industry that I never thought I'd be remotely interested in and have truly provided a platform on which I can succeed. Without their help and support, the opportunities I have been fortunate enough to experience would never have happened." 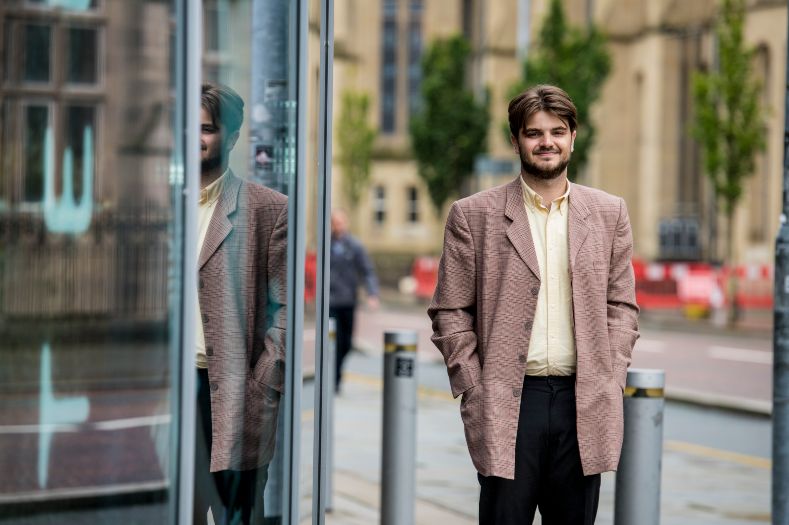 As part of his role, Matt works with manufacturers and industries to help reduce their carbon emissions.

“I want my kids, someday, to have the same opportunities I have had.”

Matt not only believes the University has set him up for a successful career but that their goals match his own.

"The University of Manchester is very engaged in sustainable development goals, and that resonates deeply with me," he said.

Earlier this year, the University topped the table of more than 1,200 universities from across the globe on action taken towards the United Nation's Sustainable Development Goals (SDGs).

The UN's 17 SDGs are the world's call to action on the most pressing challenges and opportunities facing humanity and the natural world, and with many of these issues at the heart of its core values, it's no surprise the university ranked number one in the world.

At The University of Manchester, research on Urban Living Labs (ULL) has transformed sustainable infrastructure provision locally and enhanced capacity in East Africa, South America and the Philippines.

Giving back to the community

In the Global South, and in partnership with Walk21, an international charity dedicated to ensuring our right to walk, the ULL approach was used to design and deliver training workshops to transport managers, police, investors, engineers and planners.

As a result, the workshops delivered walkability action plans that have improved the quality of life of a combined population of 5.8 million people in cities across East Africa, South America and the Philippines.

Matt added: "I feel obliged to give back to the local community, national community and the global community. I had access to all of this wonderful nature as a kid, playing out in the woodlands, breathing clean air in nice open spaces.

"I want my kids, someday, to have the same opportunities I have had. It's sad to think the communities that feel the effects of climate change are often the poorer communities. The University has increased my consciousness in that I need to think about the part I play in shaping a greener future for the future generations to come.

"I'm so glad I chose to study at The University of Manchester, it's a very beautiful campus in the perfect city.

"You're a stone's throw away from the Lake District and Peak District, all these wonderful areas of nature as well as the beautiful green spaces within the city itself, all of which reiterate the purpose of the course.

"I want to stay in Manchester. I feel incredibly proud to have studied here and hope to continue to pursue my career here. To provide environmental care to the people of Greater Manchester would be an honour".

Dr Julian Skyrme, Director of Social Responsibility at The University of Manchester, said: “As future leaders and citizens, we’re proud of the role Manchester students are playing in addressing our climate and nature crises.

"To thrive for current and future generations, Greater Manchester will increasingly depend on the knowledge and skills of graduates like Matt, who can take what they’ve learned at university to create a greener, healthier and fairer society.” 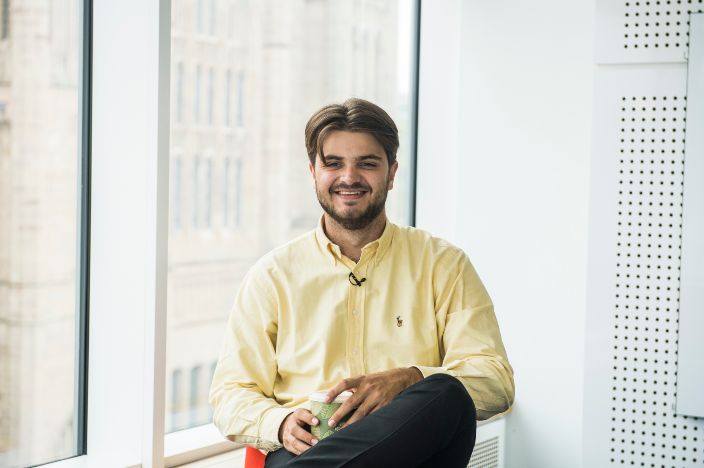 Matt said he feels proud to have studied here and hopes to continue his career in Manchester.

Learn more about social responsibility at the University and how our graduates are making a difference in Greater Manchester.

Find out how we’re leading the world on sustainable development and read the University’s Sustainable Development Goals (SDGs) 2021/22 report.

Discover more about becoming a student and studying at Manchester.