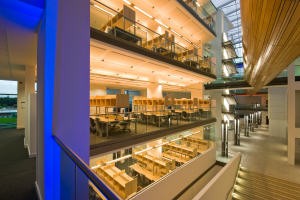 A £39M research centre that will make Manchester home to one of the largest biomedical complexes in Europe will be officially opened today (May 7th).

The AV Hill Building will house 300 scientists in 50 research groups, mainly focussing on neuroscience and immunology, from the University of Manchester's Faculty of Life Sciences and Faculty of Medical and Human Sciences.

The 6000 sq metre facility connects the Core Technology Facility, Michael Smith and Stopford Buildings, thus creating a linked complex housing more than 300 research groups. The complex is adjacent to the Wellcome Trust Clinical Research Facility and the Central Manchester and Manchester Children’s University Hospitals NHS Trust and is therefore sited at a focal point in the University's 'biomedical corridor'.

The building is named after Archibald Vivian Hill, who won the Nobel Prize in Physiology or Medicine while he held the Chair in Physiology at the University of Manchester. Professor Hill shared the 1922 Nobel Prize with Otto Fritz Meyerhof for work on the generation of heat by muscles.

One of the pioneering physiologists of the 20th Century, AV Hill made outstanding contributions in the field of muscle physiology and was regarded as one of the founders of Biophysics. In the 1930s he played a leading role in the establishment of the Academic Assistance Council (AAC), later to be known as the Society for the Protection of Science and Learning (SPSL), which rescued many German refugee academics from Nazi persecution and provided employment and financial support. During the Second World War, he accepted an invitation to stand for Parliament representing Cambridge University, and used his considerable influence in support of many worthy causes.

AV Hill's grandson Nicholas Humphrey, a Professor at the London School of Economics, Dr Ralph Kohn, a University of Manchester alumnus and winner of the Queen's Award for Export Achievement who founded the Kohn Foundation, will officially open the building. A replica of AV Hill’s Nobel Prize medal, kindly provided by Blundell’s School, which he attended, will be on display at the opening.

Professor Humphrey said: “My grandfather loved laboratories. But he could never have imagined a lab of this magnificence!”

Dr Kohn said: “I am deeply honoured to officially open the building named after such a great man as AV Hill, who was an outstanding physiologist, humanitarian and parliamentarian, together with his grandson Professor Nicholas Humphrey.”

The Deans of FLS and FMHS Professor Martin Humphries and Professor Alan North said: “This facility will further enhance the major programme of biomedical research established in Manchester over the past ten years.

“The operations group behind its design spent eighteen months considering not only how this building will operate, but also how the 'biomedical corridor' – incorporating the teaching hospitals – can be better integrated. Benefits include the clustering of core equipment, easily accessible resources for researchers and enhanced opportunities for collaboration.”

The building houses a number of internationally-recognised groups examining novel approaches for treatment of human disease. For example Professor Dame Nancy Rothwell's neuroscience research group which is investigating the causes and possible prevention of brain damage from stroke. The researchers have found that if the immune system has been stimulated by infection, it can attack the brain following a stroke. This has important implications for the elderly who are most at risk of stroke and frequently suffer from infection and other conditions, such as atherosclerosis, that stimulate the immune system. The team believe their findings could change the way stroke patients are treated in the future. For example, anti-inflammatory drugs that are currently being tested in human trials may be able to dampen the activated immune system and so reduce brain damage.

Dr Kathryn Else's immunology research group have discovered how parasitic worms subvert the host's immune system to allow them to survive. One in five people in the developing world (1,000 million) suffer from parasitic worm infection, which results in anaemia, tiredness and general morbidity. Dr Else's group is now trying to identify the molecules made by the worms which allow them to subvert the host's immune system.

And recent arrival Professor Neil Hanley is researching human developmental biology and stem cells with the aim of understanding the process so that it can be re-enacted in regenerative medicine, specifically to help diabetes sufferers.

The official opening of the AV Hill Building will take place at 5pm on Thursday 7th May.

The AV Hill Building represents an investment by the University of

£39M and includes £11.6M from SRIF. The delivery of this four-year project was overseen by the Directorate of Estates and the building was designed by Wilson Mason. The project sponsors were Andrew Loudon and Julian Davis and client group Simon Merrywest, Gary Porteous and Louise Hewitt. The stunning complex recently won the Best Corporate Workplace in the North regional heat of the British Council for Offices awards and will compete in the final in October.

High-resolution images of the building are available - photographer Oliver Foxley must be credited.

For more information, photographs or to arrange an interview with