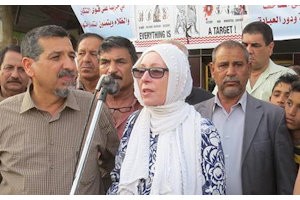 University of Manchester archaeologists are continuing to make significant new discoveries near the ancient city of Ur despite efforts by Islamic State militants to ‘culturally cleanse’ Iraq of its ancient relics.

The Manchester team - one of only two operating in non-Kurdish Iraq – has just returned from three months of fieldwork there.

During the team’s time in Iraq, Islamic State militants destroyed ruins at the ancient Assyrian capital of Nineveh and are reported to have bulldozed an Assyrian palace at Nimrud and the classical city of Hatra too, as well as wrecking museum artefacts in Mosul.

But despite this, the archaeologists, who returned to southern Iraq in 2012,, continued to work at Tell Khaiber, which is close to the ancient city of Ur, where Sir Leonard Woolley discovered the fabulous 'Royal Tombs' in the 1920s.

The team, directed by Professor Stuart Campbell, Dr Jane Moon and Dr Robert Killick from Manchester, described their Iraqi colleagues as resourceful, innovative and resilient, even when times were bad.

“Everyone is quite rightly expressing outrage at the destruction in and around Mosul. The sad fact is, there is very little one can do to prevent deliberate vandalism by well-armed fanatics.

“But if the militants think they can 'erase history' we are helping to make sure that can't happen: it is the information that is important and not the objects. Our project is actually doing something positive for the Iraqis, and that is appreciated,” Dr Moon said.

In the course of their fieldwork this year the archaeologists discovered, among other things,  50 new documents, written in Babylonian, and found evidence for a scribal school operating at the settlement, which dates to around 1500 BC.

These were in a public building the size of a football pitch, and of an unprecedented format, believed to be an administrative complex serving a capital city of the Babylonian empire.

Professor Campbell said: “We found practice texts in the form of lists of exotic animals, and of precious stones, also evidence for the making and recycling of clay tablets. The whole complex dates to the 'Dark Age' following the fall of Babylon and the disintegration of Hammurabi's empire.

“For a time when this key area of Babylonia was thought to be de-urbanised and chaotic, we have evidence of sophisticated administrative mechanisms and large-scale distribution of grain and other commodities.”

Before returning to the UK, the archaeologists deposited 300 new artefacts in the Iraq Museum and set up a temporary exhibition in Baghdad as well as visiting universities that teach, or are planning to teach, archaeology.

“What we can do is make new discoveries to be proud of and help our Iraqi colleagues and the rest of the world to understand and appreciate what the antiquities actually tells us,” concluded Dr Moon.

High resolution images are available upon request as well as a video of Dr Jane Moon speaking at an ‘Against ISIL Attacks in Iraq’ protest meeting.

Professor Stuart Campbell is also available for interview via the Media Relations Office.

If the militants think they can 'erase history' we are helping to make sure that can't happen: it is the information that is important and not the objects. Our project is actually doing something positive for the Iraqis, and that is appreciated,”