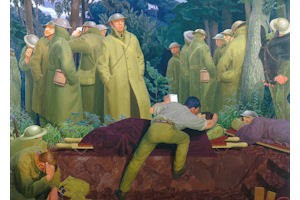 Manchester Art Gallery will present The Sensory War 1914-2014, a major group exhibition marking the Centenary of the First World War that will explore how artists have communicated the impact of military conflict on the body, mind, environment and human senses between 1914 and 2014.

The exhibition, which was co-curated by historian Dr Ana Carden-Coyne from The University of Manchester, examines how artists from 1914 onwards depicted the devastating impact of new military technologies utilised in a century of conflict beginning with the First World War.

The show will bring together a range of leading artists including Henry Lamb, CRW Nevinson, Paul Nash, Otto Dix, Nancy Spero, Richard Mosse, Omer Fast and will also feature works by the hibakusha; survivors of the atomic bomb dropped on Hiroshima which were created in the 1970s and are being shown in the UK for the first time. Presented across two floors at Manchester Art Gallery, The Sensory War will be one of the most ambitious shows to be staged at the gallery to date.

The First World War involved a profound re-configuration of sensory experience and perception through the invention of devastating military technologies, which destroyed human lives and altered the environment beyond recognition. Its legacy has continued and evolved through even more radical forms of destruction over the last hundred years. Throughout the century, artists have struggled to understand the true effect of modern technological warfare. While military and press photography have brought a new capacity to coldly document such lethal displays, artists found a different way of seeing.

Manchester Art Gallery has a nationally important collection of art of the First World War, which was assembled by its first director, Lawrence Haward. Taking their rich collection as the starting point, this show will comprise both historic and contemporary art from the UK, Germany, France, Italy, the Netherlands, the United States, Canada, Japan, Vietnam, New Zealand, Algeria, Ireland, Iran, Israel and Palestine.

The Sensory War will explore the responses of a range of artists over the past century to the sensory effects of warfare through a series of themes. Militarising Bodies, Manufacturing War will explore artist’s reactions to the industrialised process of militarisation and the effect of noise in the urban environment. It will include work by artists such as CRW Nevinson who depicted scenes from the First World War using the aggressive, Modern visual style of Vorticism. Pain and Succour will explore how artists responded to the treatment of soldiers on the front line and will include Henry Lamb’s ‘Advance Dressing Station on the Struma’ from Manchester Art Gallery’s collection exhibited with Henry Tonk’s ‘An Advanced Dressing Station in France’ from the Imperial War Museum for the first time. Rupture and Rehabilitation will look at how art was employed not only to record the treatment of soldiers in hospitals but also how it reflected on the new medical advances of plastic surgery and facial reconstruction.

Exploring this theme, the exhibition will present all 12 plates of Cologne New Objectivist, Heinrich Hoerle’s ‘Die Krüppelmappe’ (The Cripple Portfolio) alongside his oil painting ‘Three Invalids’. Seen together in the UK for the first time, these works record Hoerle’s tender but also bitter reflections on the ruined bodies of war from a German perspective. Also in this section will be a series of delicate drawings of disabled soldiers recovering in hospital by French female artist Rosine Cahen. Shocking the Senses will look at the experience of shell shock and will include works such as Pietro Morando’s Goyaesque studies depicting the appalling tortures that took place inside prisoner of war camps during the First World War.

Key themes for the exhibition will also include Bombing, Burning and Distant War exploring the effects on the ground of military conflict. As part of this section Omer Fast’s video work ‘5,000 feet is the Best’ will be on show which explores the terror of drone strikes for the victims and the psychological impact on soldiers in recent conflicts of piloting drones from a distant location on another continent. The Embodied Ruin: Natural and Material Environments will look at how artists such as Paul Nash and William Orpen used landscapes destroyed by conflict such as Flanders as a metaphor for the fate of the soldiers who fought there. Chemical War and Toxic Imaginations includes work that has been inspired by gas warfare since the First World War. Within this section, Sophie Jodoin’s haunting drawings of faces wearing gas masks will be on show, which depict a distorted human physiognomy. Haunted Ghostlands: Loss, Resilience and Memory will explore the after-effects of military conflict and will present a powerful work by emerging artist Katie Davies entitled ‘The Separation Line’ exploring the aftermath of the war in Afghanistan by documenting the military repatriation funeral processions through British town, Royal Wootton Bassett.

Maria Balshaw, Director of the Whitworth Art Gallery, The University of Manchester and Manchester City Galleries said: “The Centenary of the First World War is such a profound event and we are honoured to mark this historic occasion with the exhibition, The Sensory War 1914-2014. Curated in partnership with the Whitworth Art Gallery and the Centre for the Cultural History of War at the University of Manchester, we are pleased that this exhibition will be one of Manchester Art Gallery’s largest survey shows to date and will bring together the diverse artistic responses to war and conflict over the past century.”

Exhibition Catalogue:
The exhibition will be accompanied by a richly illustrated publication with essays from the curators of the exhibition.
The exhibition will also coincide with the launch of The Politics of Wounds: Military Patients and Medical Power in the First World War written by exhibition curator Dr Ana Carden-Coyne and published by Oxford University Press.
LISTINGS
Exhibition: The Sensory War 1914-2014
Dates: 11 October 2014 – 25 January 2015
Press View: Friday 10 October 2014
Venue: Manchester Art Gallery, Mosley Street, Manchester, M2 3JL
Tel: 0161 235 8888 Textphone: 0161 235 8893
Hours: Open daily, 10am - 5pm and Thursdays 10am- 9pm
Website: www.manchestergalleries.org
Entry: Free
For further press information and to request images please contact Jenny McVean at Sutton PR on + 44 (0)20 7183 3577 or email jenny@suttonpr.com
About Manchester Art Gallery
Manchester Art Gallery is one of country’s finest art museums. We welcome over half a million visitors each year to our home in the heart of the city, a blend of historic and contemporary architecture that echoes our innovative artistic programme. We mix works from our wonderful historic collections with the best international contemporary art to bring fresh perspectives to familiar images, create visual dialogues and encourage conversation and debate.
About Whitworth Art Gallery
Whitworth Art Gallery is part of The University of Manchester. It is home to internationally renowned collections of modern art, textiles, watercolours, prints, drawings and sculpture. Created in 1889 as the first English gallery in a park, the Whitworth is today developing a new vision for the role of a university gallery. A creative laboratory within an ambitious university, the Whitworth is serious in intent but playful in execution. It is a place where good, odd things happen.
About Centre for the Cultural History of War, The University of Manchester
The Centre for the Cultural History of War is a research and teaching centre dedicated to understanding the cultural attributes and representation of war in the modern world. Their distinctive focus is to consider 3 interlocking themes: population displacement, humanitarianism and collective memory.
The Centre is located in a major research-led university, a short distance from the new Imperial War Museum North. At the core of the Centre is a team of established and newly appointed academic staff who will co-ordinate and disseminate research both nationally and internationally. They support a new generation of research students and postdoctoral fellows in this field.
Some modules are disabled because cookies are declined. Accept cookies to experience the full functionality of this page. Learn more
ACCEPT COOKIES
We use cookies to optimize the website, no personal information is stored. Learn more
DECLINE COOKIES ACCEPT COOKIES