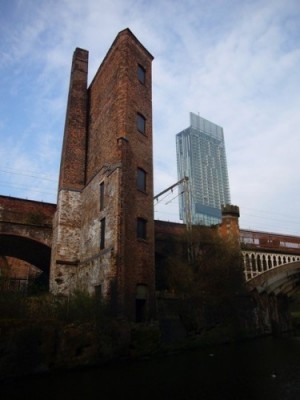 Creatives will be joining the discussion on issues affecting the burgeoning city of Manchester as part of a special weekend-long event.

Contemporary theatre company Quarantine (Wallflower; Summer.), is bringing people together from all sides of the urban regeneration debate to ask how Manchester’s growth is affecting the people who live here.

Today, more than 65,000 people live in the city centre, and this number continues to grow, with the city’s entire population expected to reach 644,100 by 2025. This growth has not been met with indifference, with Oliver Wainwright for the Guardian recently writing that the city is selling its soul in pursuit of the Manc-hattan dream.

Meet the Neighbours: The Weekend, which will take place in the city centre on 9-10 November, promises to offer fresh perspectives and broaden the conversation around the issues that affect all city dwellers.

The weekend event marks the end of a three-year, EU-funded international project called Meet the Neighbours, for which Quarantine is the lead partner, inviting artists into the heart of rapidly developing neighbourhoods in five cities across Europe and North Africa: Manchester and Salford, UK; Béthune, France; Lublin, Poland; Marrakech, Morocco; and Groningen, the Netherlands.

Curated by Quarantine with curator, dramaturge and writer Florian Malzacher (Appropriations, Berlin; Sense of Possibility, St Petersburg), the weekend will feature guided walks, expert provocations, interactions, shared meals and conversation exploring the rapid development of Manchester. The public are invited to join developers, activists, academics, not-for-profits and artists to question who Manchester’s growth is benefiting and how rapid urban change is affecting neighbourliness.

“We set up Quarantine in 1998 from the spare bedroom of our council flat in what has since been branded the ‘Northern Quarter’,” said Richard Gregory, co-Artistic Director of Quarantine. “Then, the estate we lived on was one of a few pockets of housing in Manchester City Centre. When the shops shut, with the exception of a handful of bars and restaurants, the city centre closed with it.

“Now, we’re in a very different city. In some ways, an economic boomtown, the heart of the Northern Powerhouse initiative and a magnet for foreign investment. Meanwhile, the Northern Quarter has become a cultural hotspot and a must-see destination for visitors. We’re interested in what lies behind this boom. How is the city being shaped? Who is growth benefiting – and who is disadvantaged? What are these changes doing to the life and character of the city. What does all this mean for neighbourliness and how we live together?”

Over the past year, Quarantine’s element of Meet the Neighbours has seen them develop the project Tenancy. Renting a new-build house on the border of Manchester and Salford, Quarantine has invited artists to take up residence, meet their neighbours and to make work responding to the growth and development of the two cities. Artists have included UK-based visual and performing artists Hetain Patel, and Grace Surman and Gary Winters, and international artists Sarah Vanhee (Belgium) and photographer Ali Taptik (Turkey).

Meet the Neighbours: The Weekend will begin on Saturday with a series of guided walks and visits to different locations across the city, revealing unique perspectives on life in Manchester. Confirmed start times and locations will only be texted to ticket buyers the day before. Audiences might find themselves on a hard-hat site visit, meeting the bees living on the top of Manchester Cathedral, having a cup of tea with the person who has lived in the city centre the longest, or being guided through the streets by asylum seekers. There will be expert provocations from The Guardian’s senior economics commentator Aditya Chakrabortty, future transport researcher Dr Ransford A. Acheampong (The University of Manchester), and leading Belgian artist Sarah Vanhee (Lecture for Every One; Oblivion), with other speakers still to be announced.

Sunday’s programme will be dedicated to Meet the Neighbours in its entirety, sharing what has taken place in the five countries and opening up conversations on the shifting place of artists in our cities; art as a form of social action; and neighbourliness as a response to rapid social change.

“We want to offer people new perspectives on life in the city and to bring people together who might not necessarily agree,” said Gregory. “The weekend will be a moment to reflect but also to look to the future. We’re interested in how we want to live, how we want to influence the culture of the city we live and work in. What will Manchester be like in ten years’ time and should we – can we? – steer change in a different direction?”