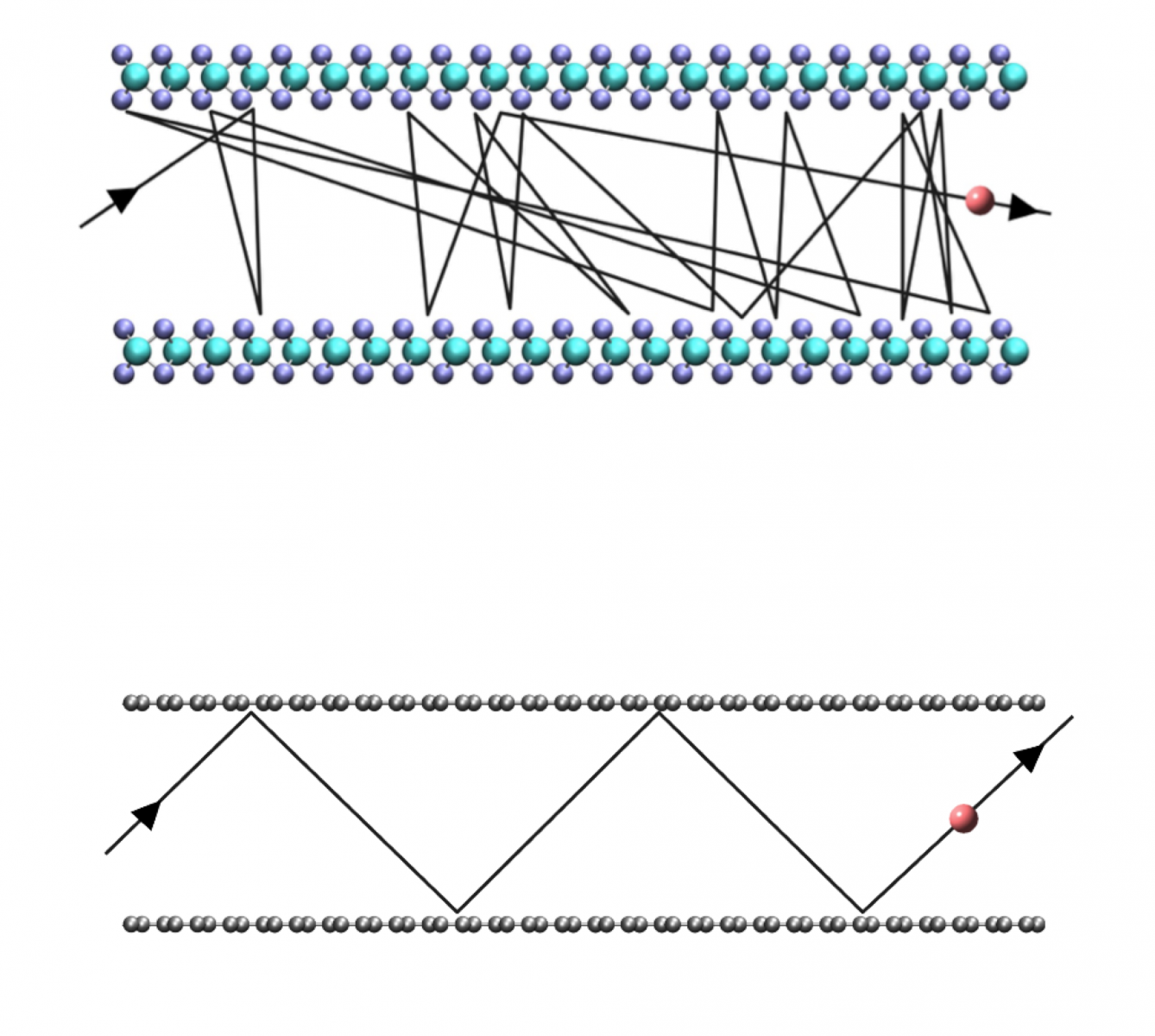 New experiments by researchers at the National Graphene Institute at The University of Manchester have shed more light on the gas flow through tiny, angstrom-sized channels with atomically-flat walls.

Published in Nature, this new research shows that the channels allow gas through them at rates that are orders of magnitude faster than expected from theory.

This will not only be important for fundamental studies on molecular flows at nanoscale but also for applications such as desalination and filtration.

The reported anomalously-high flow is due to a phenomenon called ‘specular surface scattering’, which allows a gas to pass through the channel as if it were not there at all.

To understand this effect, imagine a narrow gap between two parallel surfaces. If the surfaces are rough, light shone into the gap is scattered randomly. It would thus take zillions of bounces before the light particles (photons) emerge in random directions.

Now, if these surfaces are mirrors, the light would only need to a few bounces before photons emerge on the other side - as if there were no obstruction at all. The former scenario is what normally happens in a flow of molecules through pipes, and the latter is what was found in this study.

The team were able to obtained these results by studying how helium gas permeates through angstrom-scale slit-like channels with walls made from cleaved crystals of graphite, hexagonal boron nitride (hBN) or molybdenum sulphide (MoS2). These materials can all be exfoliated down to a monolayer thickness and provide atomically flat surfaces that are stable at room temperature and pressure.

Such angstrom-scale slits are just a couple of atoms in height and were impossible to fabricate until very recently.

Although all the used materials are atomically flat, some are flatter than others. Helium atoms are then like tiny ping-pong balls bouncing through a pipe, and depending on whether the pipe surface is bumpy or smooth, the ball comes out of the other end slower or faster

Dr Radha Boya, who was one of the leaders of the study said: “Our experiments show that surface scattering of helium is highly sensitive to the atomic landscape. For example, helium permeates much more slowly through channels made from MoS2 than through those made from the other two materials. This is because its surface roughness is comparable in height to the size of the helium atoms being transported and their (de Broglie) wavelength.”

Professor Sir Andre Geim added: “Although all the used materials are atomically flat, some are flatter than others. Helium atoms are then like tiny ping-pong balls bouncing through a pipe, and depending on whether the pipe surface is bumpy or smooth, the ball comes out of the other end slower or faster.”

Graphene is the flattest material of the three. MoS2 on the other hand is so rough for helium atoms that they bounce back randomly like ping-pong balls from a washboard surface.

The specular scattering can only be explained by taking into account quantum effects – that is, the wave-like nature of gas molecules. The researchers proved this by comparing gas flows of hydrogen and its heavier isotope deuterium.

They observed that hydrogen flows through the 2D channels significantly faster than deuterium.

Dr Ashok Keerthi, the first author of the paper said: “Although the size of both hydrogen and deuterium molecules is the same and they are chemically exactly the same, too, the de Broglie wavelength of hydrogen is larger compared to that of deuterium. And this is all what is needed to change specular reflection off the channel walls.”

The work is expected to have major implications for understanding of nanoscale systems. Much of the current understanding comes from classical Newtonian theory, but the experiments prove that – even under ambient conditions – some nanoscale phenomena intrinsically involve quantum effects and cannot be explained without taking into account that atoms also behave like waves.

The Manchester team are now looking to investigate size-selective separation of gases using even thinner channels, which could provide uses in gas separation technologies.