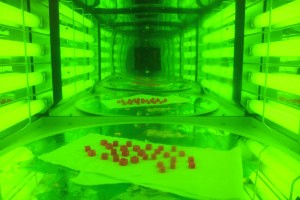 The pioneering concept of bioprinting is delivering promising results according to one of the early champions of the process, Professor Brian Derby of The University of Manchester.

Writing in the journal Science, Professor Derby of The School of Materials, looks at how the concept of using printer technology to build structures in which to grow cells, is helping to regenerate tissue.

Both inkjet and laser printer technology can be used to build the 3D scaffolds that cells can be grown in and also place the cells in these structures simultaneously. Professor Derby explains how bioprinting works: “Inkjet technology places the structure’s material in small droplets, which then solidify. More droplets are then placed on top of the previous ones in a specific pattern. The structure is built using this method which is generally referred to as additive manufacture. Laser printing uses light to solidify the structure’s material layer upon layer. These methods have allowed us to develop very complex scaffolds which better mimic the conditions inside the body.”

The scaffold provides a surface for the cells to adhere, thrive and multiply. Both the scaffold material, composition and its internal architecture control the behaviour and well-being of the cells inside.

In his review article Professor Derby looks at experiments where porous structures have been made through bioprinting. They are then placed in the body to help act as a scaffold to encourage cell growth. The cells colonise the structure and it either dissolves or becomes part of the body. This type of treatment can help patients suffering from problems such as cavity wounds. Clinical trials are currently taking place around the world to perfect this technology, and Professor Derby says it is moving towards becoming an established form of science.

Professor Derby also looks at how stem cells are being grown in printed structures that have been impregnated with certain chemicals. The chemicals are inserted during the printing process and can determine the type of cell the stem cells develop into. For example stem cells could be programmed to become cells that make up bone tissue or cartilage.

But there are limitations to the technology which is holding back breakthroughs such as the ability to grow an entire organ. Studies have found that it is very difficult to actually print the cells at the same time as making the structure that will house them. The stress on the cell as it goes through both the inkjet and laser process can damage the cell membrane. Cell survival rates have also been variable, ranging from between 40 to 95%.

The technology is also some way off progressing from an experimental platform to clinical practice. Whilst scaffolds are being clinically trialled, actually transplanting cells grown in an external structure into a patient is a more advanced process. It is still not possible at present to guarantee a consistent quality, which is required by medical device regulations.

But research is being carried out to grow external cells into tissue, such as a patch of skin, and transplant that into a patient. Professor Derby is currently working with Ear, Nose and Throat surgeons at the Manchester Royal Infirmary. He wants to use bioprinting to print cells without using a scaffold. The printed cells form a sheet that can be used for grafts inside the body, for example in the mouth or nose.

Professor Derby says: “It is very difficult to transplant even a small patch of tissue to repair the inside of the nose or mouth. Current practice, to transplant the patient’s skin to these areas, is regarded as unsatisfactory because the transplants do not possess mucous generating cells or salivary glands. We are working on techniques to print sheets of cells that are suitable for implantation in the mouth and nose.”

One area which Professor Derby’s review article highlights for the future is the ability to grow structures which can model cancerous tumours. These could then be used to test new drugs, which it’s hoped will advance the search for more effective treatments.

Writing the review article has encouraged Professor Derby that there is a strong future for bioprinting and whilst growing organs is still a long way off, the advances being made in this area are very promising.

The paper Printing and Prototyping of Tissues and Scaffolds will be published in the journal Science.

In 2009 Professor Derby was awarded the Edward de Bono Medal for Original Thinking, part of the Saatchi and Saatchi Award for World Changing Ideas, for his development of bioprinting technologies.

Professor Derby is available for interviews. Images of the bioprinters are available from the press office.