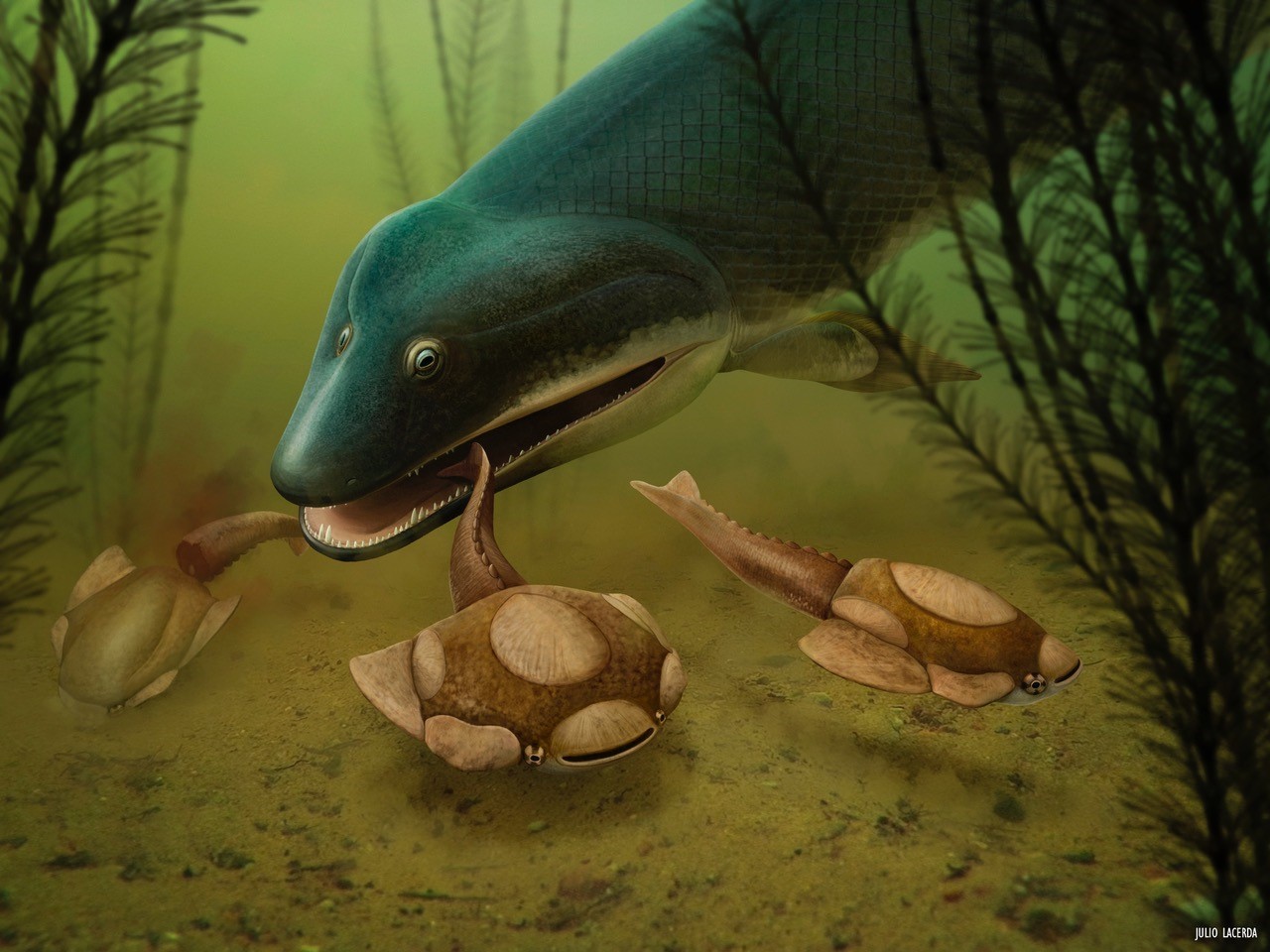 Bite marks in fossils reveal demise of our early relatives

New fossil data show that our fishy ancestors may have risen to dominance by becoming predators of their ancient jawless cousins.

Palaeontologists at The University of Manchester have revealed the changing pattern in bite marks in fossil record of early vertebrates through time, and unlocked the circumstances of our own evolution.

Almost all modern vertebrates alive today are jawed vertebrates, such as mammals, birds and sharks, but 400 million ago jawless fishes were the more diverse. Previous theories explaining the change from jawless to jawed vertebrate dominance included changing environment and climate, competition, or predation by giant sea scorpions. Now new research, published in Proceedings of the Royal Society B, implicate another cause - jawed vertebrate predators.

By studying fossilised jawless fish, researchers from the University’s Department of Earth and Environmental Sciences found that the frequency of bite marks increased through time, reaching a peak toward their extinction. The bite marks included, scratches, gouges and puncture marks in the skeleton of heterostracans, a group of jawless fish. Studying the patterns of these bite marks found that they were associated with the occurrence of jawed vertebrates; as such, our jawed relatives are implicated in the predation and demise of our jawless relatives, quite possibly contributing to their extinction.

“It is really exciting to be able to find direct evidence of an ecological interaction between fossil organisms from millions of years ago, especially one that helps us construct our own distant evolutionary history.” said Dr Robert Sansom.

It is really exciting to be able to find direct evidence of an ecological interaction between fossil organisms from millions of years ago, especially one that helps us construct our own distant evolutionary history.

Dr Emma Randle, currently a Scientific Associate at The University of Birmingham said: “Hetersotracan jawless fishes are really interesting as they are some of the first vertebrates to have bone - in the form of an armour-like ‘exoskeleton’. They thrived for many millions of years and came in a variety of beautiful forms often dominating the environments they were found within. Ultimately, like other varieties of armoured jawless vertebrates, they became extinct towards the end of the Devonian Period, but leave us a fossil record that helps us reconstruct the early evolutionary history of all vertebrates”

The researchers were able to unlock these evolutionary dynamics by studying over 2800 fossils, ranging over 50 million years, from the Silurian & Devonian periods (430 to 370 million years ago). The groups implicated as the main predators were placoderms, heavily armoured jawed vertebrates, and sarcopterygians, the lobe finned fish. The predators most associated with bite marks was Panderichthys, a key fossil for reconstructing the transition from sea to land, another important step in our own evolutionary history.

Reference: Randle, E & Sansom, R. 2019. ‘Bite marks and predation of fossil jawless fish during the rise of jawed vertebrates’ Proceedings of the Royal Society B. Published 18.12.2019.