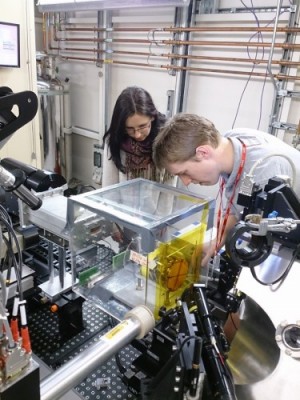 A group of scientists from The University of Manchester, the National Nuclear Laboratory (NNL) and the UK’s synchrotron science facility, Diamond Light Source, has completed research into radioactively contaminated material to gain further understanding around the issue, crucial for the safe and more efficient completion of future decommissioning projects.

Safely decommissioning the legacy of radioactively contaminated facilities from nuclear energy and weapons production is one of the greatest challenges of the 21st Century. Current estimates suggest clean-up of the UK’s nuclear legacy will cost around £117bn and take decades to complete.

The team identified a concrete core taken from the structure of a nuclear fuel cooling pond contaminated with radioactive isotopes of caesium and strontium, located at the former Hunterston A, Magnox nuclear power station in Ayrshire. The core, which was coated and painted, was taken to the Diamond synchrotron for further analysis.

Strontium is a high yield nuclear fission product in nuclear reactors and tests showed that it was bonded to the titanium oxide found in the white pigment of the paint on the concrete core’s coating.

By identifying the specific location of the radioactive isotopes, the research makes future investigation easier and could potentially leads to more efficient decontamination, saving millions of pounds by reducing the volume of our radioactive waste.

The work also found that the painted and rubberised under layers were intact and the paint had acted as a sealant for 60 years. However, experiments were conducted to examine what would happen if the contaminated pond water had breached the coating. It showed that the strontium would be bound strongly to the materials in the cement but the caesium was absorbed by clays and iron oxides forming part of the rock fragments in the concrete.

Professor Richard Pattrick, leading the project from The University of Manchester’s Dalton Nuclear Institute stated: “This work shows the power of the techniques available at the Diamond synchrotron to meet the challenge of cleaning up our nuclear legacy and the University is working very closely with Diamond to develop facilities to support research across the whole of the nuclear industry”

Professor Andrew Harrison, CEO of Diamond Light Source said: “Diamond is very pleased to have facilitated this decommissioning-related research and one major component of our future development plans is to help the UK address the complex and varied challenges of the nuclear industry.”