Brexit: what do the latest developments in parliament mean for Theresa May?
Newsroom

Brexit: what do the latest developments in parliament mean for Theresa May? 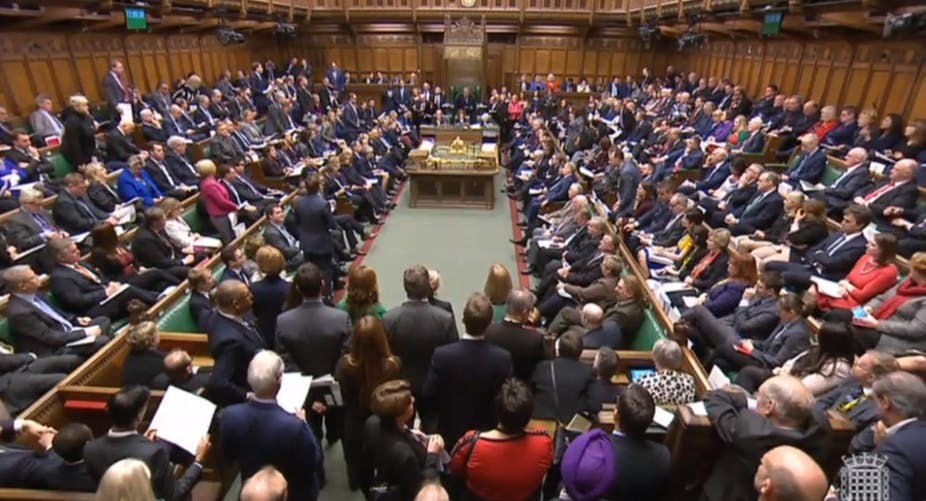 A cross-parliamentary group of MPs has struck again, landing another major blow against the government ahead of the vote on Theresa May’s Brexit deal on January 15. The manoeuvre changes the parliamentary timetable to give the prime minister just three days to come up with a new plan if she loses the vote. This was highly controversial in constitutional terms and the debate was extremely heated. Here’s what it means for the next stage of Brexit.

What does the amendment passed by parliament say?

Since the meaningful vote on the final Brexit deal was delayed in December, MPs have been pulling out all the stops to find creative ways of forcing the government’s hand. The amendments made to the Finance Bill were an example of this.

Now, MPs have voted through a business motion that drastically shortens the Brexit time line should May lose the vote on her final Brexit deal on January 15. According to the amendment, she must return to the House of Commons within three days for a vote on the further options. This is instead of the plan currently in place, which would have given her 21 days to present a new plan.

Who is behind the amendment?

This is a cross party amendment. A quick glance at the list of signatories shows some very familiar faces. Conservative backbencher Dominic Grieve has been a continual thorn in May’s side as she tries to pass Brexit legislation. Back in September 2017 he was writing about the need to challenge the government on its withdrawal legislation, which he felt was not up to scratch. His crusade to strengthen parliament’s voice on the issue has continued ever since. Now you can expect to see a “Grieve amendment” attached to almost any piece of Brexit-related legislation in parliament.

Also on the list is Chris Leslie, the Labour backbencher who has been similarly passionate about holding the government to account, tabling hundreds of amendments to May’s Brexit bills. Both are on the Politico’s list of Brexit troublemakers, where Leslie is described as an “amendment tabling machine”.

The SNP, Lib Dems, Plaid and the Greens have also signed up to the amendment. The smaller parties would typically always work together, but opposition to the prime minister’s Brexit timetable is now coming from MPs of all parties, including a significant number of her own.

Why was the selection of the amendment so controversial?

MPs spent the morning of January 9 in a heated debate about whether or not the amendment was constitutional – did it fall within the boundaries of parliamentary procedure? Many directed significant ire at Speaker John Bercow for selecting it for consideration, implying that he may be straying from the impartiality which the occupant of the chair should stand by. For some it was a case of the speaker rewriting or reinterpreting parliamentary rules, something that parliamentary correspondent Mark D'Arcy described as a “massive ruling” that could alter the course of Brexit should the prime minister lose the vote on the final deal.

This was because the amendment was tabled to a business motion. This is different to tabling amendments to a piece of legislation like the EU Withdrawal Bill. Typically, only the government can amend the business or timetable of the House and as such, amendments would normally only come from government. There was some speculation that the amendment was a test, putting the speaker in an awkward position as he had to decide what to do with it. It later became apparent that the amendment had been selected (perhaps to placate MPs and allow the matter to be on the record). In the speaker’s words, it came down to a distinction between a motion and an amendment, with this being one of the latter, as well as a discussion about the meaning of the word “forthwith” and whether this meant that a motion was unamendable or not.

It was clearly a difficult decision for Bercow, who repeatedly said he had to think carefully and make a judgement. But with reports that the House of Commons clerks had advised against the move, it seemed that the speaker really was taking a decision alone. It means that although parliament was not able to debate the amendment, Grieve was able to officially move it, and as a result, the House of Commons could vote on it. It was passed by 308 votes to 297.

Is this amendment enough to stop a no-deal Brexit?

On its own the amendment is not going to stop a no-deal Brexit. But it does speed up the timetable by which the government would need to come back to the House of Commons with a new plan of action should the vote on the deal be lost. As such, it is part of parliament’s wider attempt to rewrite the Brexit story. It is clear evidence of opposition to a no-deal Brexit and a growing consensus around the need for a clear decision to be expressed by parliament on a suitable alternative to the deal currently on the table.

Does it currently look like May will lose the Brexit deal vote?

The prime minister’s assurances over Christmas about the Northern Ireland border may have quelled the opposition from a handful of MPs, but it still looks likely that she will lose the vote on the final deal. It was reported that she planned to repeatedly put the deal to a vote until it passed. Grieve’s amendment aimed to prevent this. But it’s not really clear if the prime minister has a Plan B.

What is Labour planning on doing if she loses the vote?

At the moment we are expecting Labour to table a motion of no confidence in the government if the prime minister loses the vote on January 15. But the Grieve amendment may complicate things a little bit. Should party leader Jeremy Corbyn hang tight and see what comes back in the three-day window, or table it right away? His chances of winning would depend on the timing and on whether or not a plan B does emerge from the government benches.

Louise Thompson, Senior Lecturer in Politics, University of Manchester
This article is republished from The Conversation under a Creative Commons license. Read the original article.