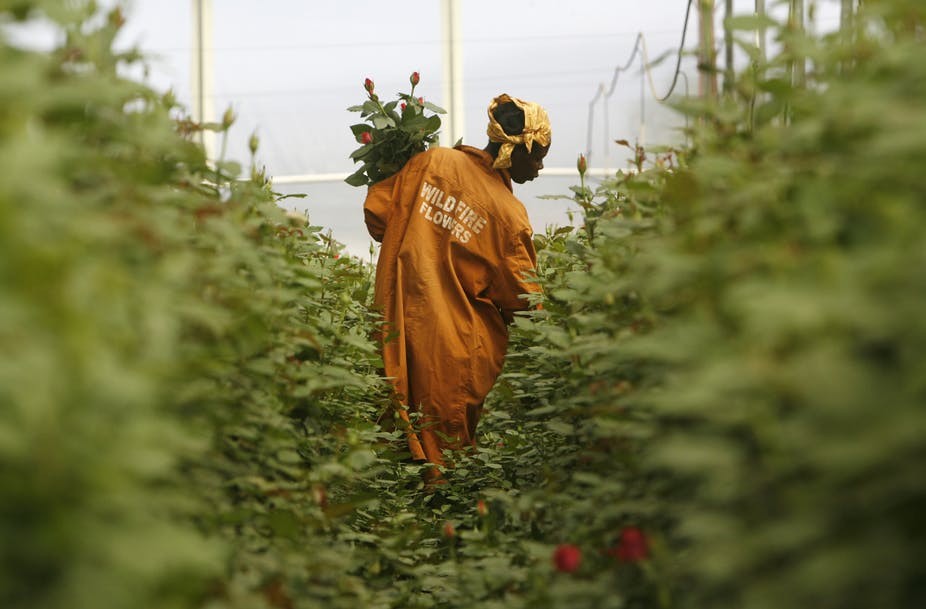 This Valentine’s Day florists are predicting sales of USD$95 million in the UK alone. But where do they all come from?

Kenya is second only to the Netherlands for flower imports to the UK, with a total of 13,013 tons per year. And because of globalisation and global value chains, the Netherlands itself imports most of its flowers from Kenya, with an estimated value of USD$1 billion in 2016.

In Kenya, growth in the volume and value of flower exports led to it moving from 3.6% to 8.1% of world exports between 2001 and 2016. Most exports are to the Netherlands and the UK. An estimated 100,000 tons of flowers leave Kenya every year for these two markets. Over a 132,000 tons are exported worldwide every year. In recent years Kenya has moved away from exporting lower value to higher value stems and bouquets.

One of the groups of people to benefit from the burgeoning industry have been women. They form an estimated 75% of workers at production level in Kenya and have seen some positive improvements in their employment conditions and rights over the years.

But it hasn’t been an easy journey. At the outset women faced systemic inequalities which made them vulnerable workers. These included poor labour conditions, the violation of health and safety rules and sexual harassment. The product upgrading, along with concerted campaigns by human rights activists, NGOs, trade unions and the buy-in of business led to a sea change in the women’s working conditions.

The reforms show that when a broad range of stakeholders come together substantive changes can be made in favour of vulnerable women workers. In line with the UN Guiding Principles on Business and Human Rights, big corporations can be transformative in contributing to social justice for women workers. In a collaborative effort, the business community has a great opportunity to step in and lead the change.

A long struggle for rights

In addition there were also often demands for unplanned overtime because of last-minute orders placed by buying companies. This caused childcare problems. Women were also subject to additional risks such as sexual harassment and long hours and night time journeys to and from work.

Thanks to specific gender policies on workers’ rights and grievance programmes, as well as to a decisive product upgrading, many Kenyan flower growers underwent a crucial switch from temporary to permanent contracts. This meant that women workers were now members of the unions, thus giving them access to another main channel to grievance and remedy.

Kenyan NGOs, trade union and human rights organisations played a critical role in raising issues. A complaint was made about supermarket sourcing to the UK Ethical Trading Initiative, an alliance of companies, trade unions and NGOs that promotes respect for workers’ rights around the globe. This led to investigations and involved visits to Kenya. A number of changes resulted in the leading flower farms, bringing real change for women workers.

Gender committees were established on farms, providing a channel for women workers to voice grievances. Some supermarkets allowed longer lead times for delivery, assisting childcare responsibilities while reducing the risk of sexual harassment at night.

Improvements in Kenya’s employment law in 2007 also helped improve national labour standards. Over time, more women became supervisors and moved into managerial positions; and there was a significant reduction in reporting of labour abuse and sexual harassment. Procedures are now in place for reporting problems and for remedying them.

But there is still a long way to go: workers are working with trade unions and civil society organisations in their fight for a living wage and other rights.

Corporations at the top of global value chains have a responsibility to stop exacerbating gender discrimination in their operations by factoring gender into the due diligence investigations they do into corporate human rights.

The first step is to recognise that protecting women workers’ rights is their responsibility. And that workplaces can be used as an engine for changing social norms and reducing gender inequalities.

At the same time, companies can lead the charge in finding viable solutions for protecting women workers’ rights. Tackling the root causes of gender inequalities, securing access to effective remedial processes and boosting regulations on sexual harassment can lead to fundamental and systemic change.

Human rights abuses and sexual harassment can be tackled in global value chains. But for this to happen large corporations must take responsibility. In addition, a broad range of actors must be involved in securing real change for women workers, as Kenya has shown.