Canterbury Tales to be captured on camera
Newsroom

Canterbury Tales to be captured on camera 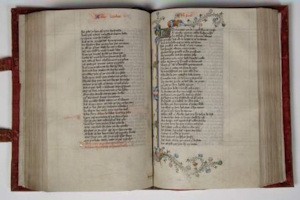 Experts from The University of Manchester's John Rylands Library are to spend four days at a beautiful seventeenth century mansion to capture its world famous Canterbury Tales manuscript on camera (22- 25 March).

Visitors to the National Trusts' Petworth House, Sussex, will be able to watch the team of four as they work with cutting edge equipment to record the early 15th century Chaucer manuscript in close detail.

It is part of a 18-month project - funded by JISC - which showcases The University of Manchester as one of the country's leading centres for digitisation of rare books, manuscripts and archives.

The Petworth edition of the famous stories was hand written between 1420 and 1450, just a few years after they were first conceived by Geoffrey Chaucer.

The Tales relate a story-telling contest by a group of pilgrims to create an ironic picture of 14th  century English life.

It is thought the manuscript has been at Petworth for at least four hundred years.

The Centre of Digital Excellence will support universities, colleges, libraries and museums which lack the resources to carry out the specialised work.

Using images taken by a £22,000 camera, scholars will be able to study rare books, archival documents, artworks and museum artefacts in huge detail.

Mark Purcell, Libraries Curator for the National Trust said: "The Petworth Chaucer manuscript is one of the most important books in the possession of the Trust.

“Another possibility is that the manuscript was bequeathed in 1451 by Sir Thomas Cumberworth to his grand-niece, whose husband acted as agent for the 4th Earl of Northumberland.

"The text includes many forms of words peculiar to the West and North Midlands. It was written by a single hand, and there are many decorated initials."

Assistant Librarian Carol Burrows, from The University of Manchester, manages the project. She said: "We're very excited to be working with the National Trust to launch this project.

"No other organisation in the north of England specialises in the object-centred digitisation of heritage materials.

"As the set-up costs of such facilities are prohibitive for most institutions, many can't afford to carry out this sort of work.

"Over the eighteen months, we will be investigating whether a Centre for Heritage Digitisation, based within The University of Manchester, will work as a commercial concern.

"By locating the Centre within the University we will be able to draw on our exceptional body of skills and expertise."

Ben Showers, programme manager at JISC, said: " What makes this project so exciting is that not only will the John Rylands Library be working with other organisations to make available online some rare and important scholarly works.

“But they will also be exploring business models for the long term viability of digitisation.

“It will make available precious resources that the organisations themselves may not have the skills, resources or simply the time, to put online."

The John Rylands University Library (JRUL), The University of Manchester, has world-renowned research collections. It was recently designated by HEFCE as one of only five National Research Libraries - the only one located in the north of England.

Project partners also include Chetham’s Library in Manchester, the Brotherton Library at Leeds University, Manchester Museum and the National Trust.

The images will be available on-line as part of the John Ryland’s Library’s Medieval Collection: http://www.manchester.ac.uk/library/eresources/imagecollections/university/medieval/

Carol Burrows from the John Rylands Library is available for comment.

JISC (www.jisc.ac.uk ) inspires UK colleges and universities in the innovative use of digital technologies, helping to maintain the UK's position as a global leader in education.