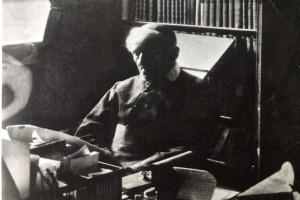 A three-year project to digitise the tens of thousands of documents produced by one of the most important and prolific Christian thinkers of the past 200 years has been launched.

John Henry Cardinal Newman's enormous handwritten archive, kept at the Birmingham Oratory, will be captured by a team of experts using cutting edge equipment at The University of Manchester's John Rylands Library.

The documents, thought to number around 200,000, will then be re-housed at the Birmingham Oratory in custom made boxes, made by the collection care team at Rylands.

US-based National Institute for Newman Studies initiated the groundwork for the project over ten years ago.

It is now funding and managing the £386,000 digitization, which will transform the archive into a comprehensive digital library that will eventually include all of Newman’s published and unpublished works.

Newman, who died in 1890 aged 89, was an academic and a clergyman in the Church of England before he converted to Catholicism.

Then, as a Catholic priest his influence increased still further and continues to this day. Pope Leo XIII made him a Cardinal in 1879.

In 2010, he was beatified by Pope Benedict XVI, the final stage before being declared a saint.

Newman was a prolific writer, exchanging letters with the public, leading figures, and even prime ministers. His books and essays are read across the world.

He joined the Roman Catholic Church in 1845, and pursued a life of study and prayer, mainly in the Catholic parish of the Birmingham Oratory.

Father Ignatius Harrison, the Provost of the Birmingham Oratory, said: "Cardinal Newman is a towering figure of Christian thought, and has had an enduring influence on modern Western intellectual life.

"His long life of ministry and scholarship left a deep mark on the national consciousness of Britain, transforming its ecclesial, devotional, intellectual, and popular identities in ways we are still only beginning to understand.

"Through his prolific and widely influential writings and his example of practical holiness, Newman also left a deep and lasting impression on the non-English-speaking world.

"So this hugely important collection provides a unique record of an influential churchman who is one of the most important voices in recent western European thought."

Mary Jo Dorsey from the National Institute for Newman Studies said: "Our prime aim is to enhance and extend the reach of Newman's life, thought, and spirituality.

"An important goal of the Digital Library is to not only preserve and extend the Newman Archive to scholars around the globe, but to build a multidimensional research tool for the humanities.

"So we are delighted that the project will bring his teachings to the community of Newman scholars as well as to today's pluralistic, diverse society.

"A robust Digital Library and research platform created by our Pittsburgh colleague Crivella West, will be a full-text anthology of Newman's letters, diaries, manuscripts, and documents saved by the Cardinal.

Jamie Robinson, is a Senior Photographer at The John Rylands Library's Centre for Heritage Imaging and Collection Care.

He said: "We’re delighted to be working with NINS and the Oratory on this prestigious project which will provide a wonderful research resource for scholars and students with an interest in nineteenth century studies.

“This is an enormous task, requiring two extra full time staff to cope with the workload – but one which we will relish.

"We are one of the few services in the UK to provide specialist digitisation and collection care of heritage and cultural collections so this commission is a perfect match with our expertise.

"No other organisation in the north of England specialises in the bespoke digitisation and collection care of heritage materials."