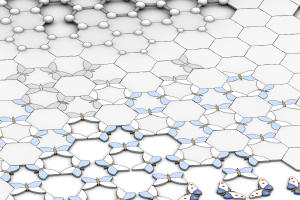 Wonder material graphene, when combined with other graphene-like materials, paves the way for vast new areas of scientific discovery and previously unheard-of applications, University of Manchester researchers have revealed.

Writing in Nature, a large international team led Dr Roman Gorbachev from The University of Manchester shows that, when graphene placed on top of insulating boron nitride, or ‘white graphene’, the electronic properties of graphene change dramatically revealing a pattern resembling a butterfly.

The pattern is referred to as the elusive Hofstadter butterfly that has been known in theory for many decades but never before observed in experiments.

Combining graphene with other materials in multiple-layered structures could lead to novel applications not yet explored by science or industry.

Graphene is the world’s thinnest, strongest and most conductive material, and promises a vast range of diverse applications; from smartphones and ultrafast broadband to drug delivery and computer chips. It was first demonstrated at The University of Manchester in 2004.

Initial trials of consumer products involving graphene-based touch screens and batteries for mobile phones and composite materials for sports goods are being carried out by major multinational companies.

One of the most remarkable properties of graphene is its high conductivity – thousands of times higher than copper. This is due to a very special pattern created by electrons that carry electricity in graphene. The carriers are called Dirac fermions and mimic massless relativistic particles called neutrinos, studies of which usually require huge facilities such as at CERN. The possibility to address similar physics in a desk-top experiment is one of the most renowned features of graphene.

Now the Manchester scientists have found a way to create multiple clones of Dirac fermions. Graphene is placed on top of boron nitride so that graphene’s electrons can ‘feel’ individual boron and nitrogen atoms. Moving along this atomic ‘washboard’, electrons rearrange themselves once again producing multiple copies of the original Dirac fermions.

The researchers can create even more clones by applying a magnetic field. The clones produce an intricate pattern; the Hofstadter butterfly. It was first predicted by mathematician Douglas Hofstadter in 1976 and, despite many dedicated experimental efforts, no more than a blurred glimpse was reported before.

In addition to the described fundamental interest, the Manchester study proves that it is possible to modify properties of atomically-thin materials by placing them on top of each other. This can be useful, for example, for graphene applications such as ultra-fast photodetectors and transistors, providing a way to tweak its incredible properties.

Professor Andre Geim, Nobel Laureate and co-author of the paper, said: “Of course, it is nice to catch the beautiful ‘butterfly’ which elusiveness tormented physicists for generations.

”More importantly, this work shows that we are now able to build up a principally new kind of materials by stacking individual atomic planes in a desired sequence.”

Dr Gorbachev added: “We prepared a set of different atomically-thin materials similar to graphene then stacked them on top of each other, one atomic plane at a time. Such artificial crystals would have been science fiction a few years ago. Now they are reality in our lab. One day you might find these structures in your gadgets.”

Professor Geim added: “This is an important step beyond ‘simple graphene’. We now build foundations for a new research area that seems richer and even more important than graphene itself.”

The Manchester paper is collaboration that involved researchers from the University of Lancaster in the UK, Instituto de Ciencia de Materiales de Madrid in Spain and National High-Field Laboratory in Grenoble, France.

It will appear in Nature back to back with another paper reporting similar butterflies in two layers of graphene, which comes from a group of Dr Philip Kim, Columbia University.

The paper, Cloning of Dirac fermions in graphene superlattices (doi:10.1038/nature12187), is available on request from the Press Office

Dr Gorbachev is available for interview on request

More information about graphene is available from www.graphene.manchester.ac.uk

High-resolution images illustrating this work are available from http://onnes.ph.man.ac.uk/~geim/butterflies/ and, more generally, from  www.condmat.physics.manchester.ac.uk/imagelibrary/