Professor Stuart Holmes' Inaugural Lecture was hosted by the School of Chemical Engineering and Analytical Science (CEAS) on Friday 1 February to celebrate his professorship.

Entitled 'From Zeolites to Fuel Cells (and beyond): a career path through intricate porous structures', the lecture took place in the Sackville Street Building and attendees included a mix of academic and professional services staff.

In the lecture Stuart outlined various areas of his research, from his early career to waste water management and his most recent work examining fuel cells. He also gave some insight into the future of fuel cell technology and, in a broader sense, the hydrogen economy. 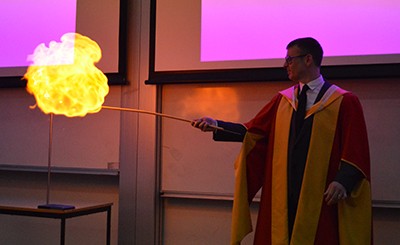 Stuart reminisced about previous colleagues who had helped him throughout his career, while also embarrassing some with old photos and stories. He also made efforts to explain his research in ways that all could understand.

He demonstrated how his in-depth knowledge, sense of humour and positive attitude towards his work have led to him earning the respect of his fellow academics within the School.

The School is planning more inaugural events in the future, with the next lecture being held on March 29. It will be delivered by Meghan Jobson and details can be found here.