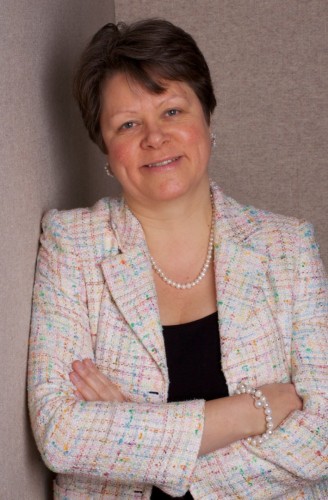 One of the UK’s most senior female engineers has been appointed the chair of the £235m Sir Henry Royce Institute for Advanced Materials, Chancellor George Osborne announced today.

Professor Dame Julia King, Baroness Brown of Cambridge, is the Vice-Chancellor of Aston University and a leading expert and Government advisor on education and technology in engineering.

She will act as independent Chair of the Institute, which has its hub at The University of Manchester and spokes at the founding partners, comprising the universities of Sheffield, Leeds, Liverpool, Cambridge, Oxford and Imperial College London.

The Institute will allow the UK to grow its world-leading research and innovation base in advanced-materials science, which is fundamental to all industrial sectors and the national economy.

It is also seen as a crucial element of the Government’s Northern Powerhouse initiative, an attempt to boost economic growth in the North of England and balance the UK economy.

After sixteen years as an academic researcher and university lecturer at Cambridge and Nottingham universities, Baroness Brown joined Rolls-Royce plc in 1994, where she held a number of senior executive appointments, including Director of Advanced Engineering for the Industrial Power Group, Managing Director of the Fan Systems Business, and Engineering Director for the Marine Business.

Baroness Brown is a remarkable individual-an accomplished engineer, who has worked for Rolls Royce for a number of years, has held positions at Cambridge and Imperial and has been vice-chancellor of the University of Aston since 2006.

In 2002 Baroness Brown was appointed Chief Executive of the Institute of Physics, and in 2004 she returned to academia as Principal of the Engineering Faculty at Imperial College, London.  In December 2006 she became Vice-Chancellor of Aston University. She will stand down from this role next year, and has recently become a member of the House of Lords.

Welcoming the appointment, Professor Dame Nancy Rothwell, President and Vice-Chancellor of The University of Manchester, said: “Baroness Brown is a remarkable individual-an accomplished engineer, who has worked for Rolls Royce for a number of years, has held positions at Cambridge and Imperial and has been vice-chancellor of the University of Aston since 2006.”

The Institute will focus on 10 key areas of materials research, which are grouped into four themes – Energy, Engineering, Functional and Soft Materials – critical areas to underpin the government’s industrial strategy, resulting in economic growth throughout the UK.

The Institute will galvanise the economy of the North of England, and the UK more widely, whilst ensuring that the UK leads the world in the development and application of advanced materials.

Research into Advanced materials is one of the The University of Manchester’s research beacons. These are examples of pioneering discoveries, interdisciplinary collaboration and cross-sector partnerships that are tackling some of the biggest questions facing the planet

University professors publish 'The New Architecture of Science'
COVID continues to hit North hard as analysis indicates lockdown varied in its effectiveness across the country
Multimillion pound scheme could make early diagnosis of liver disease a reality
Cold War antiseptic has potential in fight against drug-resistant germs and viruses
Unusual blue woodlice may help develop new antiviral materials
Hearing loss: early signs of damage in young adults who regularly attend loud clubs and concerts
Some modules are disabled because cookies are declined. Accept cookies to experience the full functionality of this page.
ACCEPT COOKIES
We use cookies to optimize the website, no personal information is stored. Learn more
DECLINE COOKIES ACCEPT COOKIES