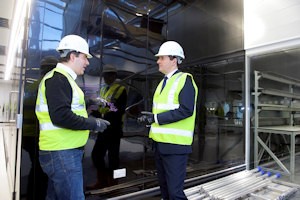 Chancellor of the Exchequer George Osborne paid a visit to the National Graphene Institute (NGI), as further details emerged about the new £235m Sir Henry Royce Advanced Materials Institute based at The University of Manchester.

The Chancellor was shown state-of-the-art cleanrooms and laboratories at the £61m NGI by Nobel Laureate Sir Kostya Novoselov and signed one of the ‘writable’ walls in the world’s leading centre for graphene research and commercialisation.

Mr Osborne then visited the Museum of Science and Industry (MOSI) to support the launch of Manchester as the European City of Science in 2016.

The NGI is set to open in the first quarter of 2015, and is intended to allow academics and industry to work side by side on the applications of tomorrow. The Government provided £38m, via the Engineering and Physical Sciences Research Council, with the remaining £23m provided by the European Regional Development Fund.

In his Autumn Statement last week, the Chancellor announced the Sir Henry Royce Institute for Materials Research and Innovation, which will be based at The University of Manchester.

The new Institute, will have its research centre in Manchester.  The Manchester centre will be supported by satellite centres or ‘spokes’ at the founding partners, comprising the universities of Sheffield, Leeds, Liverpool, Cambridge, Oxford and Imperial College London.  The total funding from Government was £235m.

At the MOSI launch, Professor Colin Bailey, Vice-President and Dean of the University of Manchester’s Faculty of Engineering and Physical Sciences, outlined the 14 key areas of materials research the Institute will feature, with graphene being one of the 14 areas.

The 14 areas are grouped into four themes – Energy, Engineering, Functional and Soft Materials – critical areas to underpin the government’s industrial strategy, resulting in economic growth throughout the UK. .

Proposed in answer to a challenge by the Chancellor to establish a Northern powerhouse, the Institute will galvanise the economy of the North of England, and the UK more widely, whilst ensuring that the UK leads the world in the development and application of advance materials.

Mr Osborne said: “Science is key to building the Northern Powerhouse and is central to our long term economic plan. The North of England has huge expertise in this area as is demonstrated by the well-deserved award of European City of Science 2016 to Manchester.

“That is why the new Sir Henry Royce Institute for Materials Research and Innovation in Manchester, with satellite centres across the region, will become such an important part of our plans for putting science at the heart of the Northern Powerhouse.

“It was great to meet Professor Novoselov again and see progress on the new National Graphene Institute which will be crucial to developing this cutting edge technology. This facility, alongside the Royce Institute, will help cement the north, and Manchester in particular, as a world leader in science and innovation.”

Professor Bailey added: “The Sir Henry Royce Institute will be a world-leading centre for materials research, and is testament to the excellent research taking place at The University of Manchester, the partner institutions and more widely throughout the UK.

“With the announcement of Manchester as the European City of Science in 2016, as well as the considerable funding graphene has enjoyed over the past few years, it is an exciting time for the city and should prove to be inspiring for the next generation of scientists and engineers.”

Among other science projects announced yesterday is £3m for MOSI to fund new exhibition spaces. The museum will host a graphene exhibition in 2016. Professor Luke Georghiou, Vice President for Research and Innovation, and Professor Brian Cox also made presentations at the event.

Aims of the Sir Henry Royce Institute for Materials Research and Innovation:

•    Underpin and provide growth to the entire UK manufacturing base and reduce the time to market from invention to application for new materials, with significant knock-on impact for the national economy

•    Invent and innovate new materials in various sectors covering fabricating, testing, analysing and demonstration, under different operating environments and provide the ‘missing link’ in the development of materials within the UK

•    Provide an international beacon for UK expertise and deliver national leadership and critical mass to allow identification of expertise within the UK.

•    Provide the required skills and training, allowing industrialists to work alongside academics, to produce the expertise of the future from apprentices to doctorates.