Today (Wednesday 6th July), Sir John Chilcot's long awaited report into the Iraq War has been published. Here is the reaction to its findings and conclusions from The University of Manchester's leading international political and legal experts. 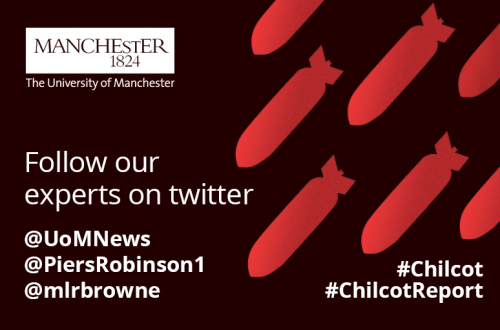 Dr Shavana Musa is Lecturer in Constitutional and International Law at The University of Manchester and a BBC Expert Voice. She says the report is a 'serious damnation' on the decision to go to war and could pave the way for 'victims of families to proceed with criminal and/or civil legal action.'

"Whilst the Chilcot Inquiry does not explicitly conclude on the legality of the use of force, the report clearly shows that the decision-making processes and circumstances from which they derived were ‘far from satisfactory’ and there was no mistake that the ‘policy on Iraq was made on the basis of flawed intelligence and assessments’. This and the lack of an ‘imminent threat from Saddam Hussein’ infer a serious damnation on the decision to go to war.

"Notwithstanding the purported a-legal character of the Report, it will undoubtedly provide significant evidence, and thus impetus, for victims of families to proceed with criminal and/or civil legal action. Civil liability claims could also arise from the fact that the findings of the Report show the absence of an effective asset tracking system - something the MOD had identified but not addressed - as well as serious equipment failures caused as a result of the decisions taken."

Dr Piers Robinson is Senior Lecturer in International Politics at The University of Manchester and an expert in the role media and propaganda can play in the run up to and during conflict. He is author of 'Pockets of Resistance: the British news media, war and theory in the 2003 invasion of Iraq' and has recently published research articles on the 2003 Iraq War.

He says: "On two central matters, Chilcot has raised very difficult issues for Blair and senior intelligence officials. For Blair, Chilcot started his statement by claiming that Blair and Bush had settled on regime change, requiring a clever plan, in late 2001. This would suggest that all that followed, WMD over-claims, UN inspections and so on, were all geared toward removing Saddam from power. This suggests a profound deception by Blair who maintained all along that Saddam could stay in power if he complied with US and UK demands and UN resolutions"

Martin Browne is a trained barrister and Associate Researcher at the Manchester International Law Centre. He has also advised governments and NGOs on the jurisdiction of the International Criminal Court (ICC).

Wilful deceit: “The decision to go to war before peaceful options exhausted, the exaggeration of WMD evidence, and the inadequate conditions in which the legality of the war was concluded, are all points that could establish the existence of a deliberate (wilful) deceit in the conduct of the Prime Minister. Particularly the focus on Blair’s strategizing for regime change as early as December 2001."

On the legality of the invasion: "Chilcot has not concluded the question of whether or not the decision to go to war was legal. Yet his conclusion that there was in March 2003 “no imminent threat from Saddam Hussein”, combined with criticism of the war the decision was made amount to a strong condemnation of the decision taken."

On Tony Blair: “Chilcot stops short of calling Blair’s evidence to the Inquiry a ‘lie’ but essentially dismisses his defence of ‘hindsight’. It is clear that Blair, and those around him, disregarded the risks identified in reports in 2002-2003 that accurately set out the consequences that followed.

"Chilcot places the blame for the failure to plan solely at Blair’s feet. The omissions of the Prime Minister include; the failure to establish clear ministerial oversight of post-conflict strategy, to ensure a resourced plan was in place, and to press the US to develop joint plans. All of these ‘omissions’ as Chilcot terms them, otherwise known as mistakes or failures, together prevented the UK from achieving its objectives and increased the risk that the UK would be unable to respond to the unexpected. In summary, Blair’s mistakes increased the risks for UK soldiers.

The decision to take military action followed an exchange between Blair and Lord Goldsmith. But, notably, the critical decision about Saddam’s breach of UN Security Council Resolution 1441 was made by Blair alone, without consulting lawyers, and no formal record of his reasons for the decision was made. Chilcot concludes that mistakes were made by Blair in failing to request written advice from Goldsmith, and the basis for further material breaches of 1441 should have been discussed in cabinet or cabinet committee. These are all factors that could indicate misconduct in public office.

Occupying Power: "As an Occupying Power the UK had legal obligations including to maintain law and order, protect human rights and the population in general. Despite being given responsibility by Resolution 1483, the UK failed to fulfil those obligations. Little thought was given to the role of UK personnel in occupation, and no governance arrangements were designed before invasion. Chilcot’s conclusions sets out a basis for legal claims by those affected by the UK’s failure to fulfil its obligations through the complete failure to plan for governance of southern Iraq."