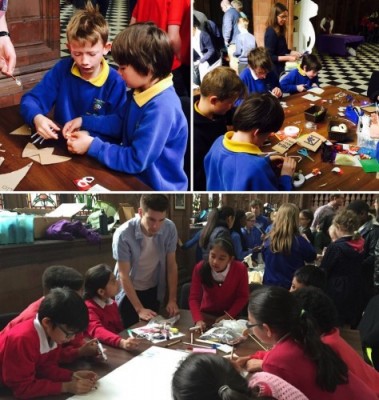 Children from 20 schools across Greater Manchester have joined forces with engineers from Siemens, music experts from the Hallé Orchestra and academics from The University of Manchester to create musical robots for the University’s ‘robot orchestra’ project.

The robot orchestra intends to explore how, through creating and performing, people can have fun and care for the environment. It aims to utilise the imagination and community spirit of Greater Manchester to create an ‘orchestra’ made up, in part, of recycled materials. Local people of all ages are being encouraged to get involved by salvaging and donating redundant technology, building the robots and the instruments, writing code, hosting maker events or sharing their musical expertise.

The project was dreamed up by Engineer Professor Danielle George and citizen scientist Dr Erinma Ochu MBE, who are both based at The University of Manchester. Danielle worked with the Royal Institution to find existing robots and get them to perform the Doctor Who Theme at her 2014 Royal Institution Christmas lectures, and Erinma helped to design the Museum of Science and Industry’s globally successful citizen science initiatives.

Almost 200 primary and secondary school children attended the event in the Great Hall at the University’s Sackville Street Building, where partner organisations such as Apple, The Hive, Noisy Toys and FabLab led workshops to build music-making robots. Around 20 robots were created, including a series of percussive devices such as a drum made from Pringle tubes, plus various tambourines and bells.

Seven of these completed robots were tested and successfully linked with the central coordinating robot - named ‘Graphene’ because it’s a great conductor - which is being developed by Robot Orchestra partner Siemens. A representative from the company made a presentation to the youngsters about the orchestra and how they can help to create it. Steve Pickett, Education Director at the Hallé Orchestra, also revealed some of the exciting new composition being especially created by them for the robots, and explained how they will perform the score in concert.

The children were also able to see an automated glockenspiel, and a hexapod robot ‘spider’ which played notes with its multiple feet.

“The children at this event have made history, by helping to make the first robot orchestra for the first European City of Science to be hosted in the UK. We saw some real ingenuity during the course of the day, from both the schoolchildren and their teachers – the event really inspired them to be creative. The successful mix of musicians and engineers was a real highlight of the day, which demonstrates that engineers are among the most creative of professionals.”

The orchestra will give its full debut performance in July, during the Euroscience Open Forum - Europe’s largest science conference. There are lots of ways to get involved - you could start recycling computer parts and old instruments to use to make a musical robot, attend a maker event, or put on your own event and get in touch to tell us about it. Going to an event is a great way to find collaborators who can help you - visit the website at www.robotorchestra.co.uk or follow @robotsmcr on Twitter to find out more.