Q&A: how cities can recover from natural disasters
Newsroom

Q&A: how cities can recover from natural disasters

In the space of a month, hundreds of lives have been lost due to natural disasters. Mexico was hit by two high-magnitude earthquakes within two weeks, while swathes of the US and the Caribbean have been severely damaged or destroyed by the force of three successive hurricanes: Harvey, Irma and Maria. The Conversation spoke to Alfredo Stein Heinemann – a lecturer in urban development planning with more than 30 years of experience studying post-disaster reconstruction – to see how communities can mitigate and recover from the devastation wrought by natural disasters.

Who are the people at greatest risk from natural disasters?

In my experience from different places around the world, the people who suffer most when disasters happen are the urban poor. Usually, in these communities, the materials that people use to build their houses are substandard. Also, because land is so expensive in the city, the poor end up living in areas that are more vulnerable to the impacts of earthquakes or hurricanes.

What is interesting about the recent earthquake in Mexico, is that the affected areas that we have seen through the images transmitted worldwide seem relatively well off, and many of the buildings that have collapsed were located in middle-class neighbourhoods. Compared to the earthquake which hit Mexico City in 1985 and killed 5,000 people, there were far fewer casualties this time around, and there’s no doubt that building codes, norms and practices have improved in the city over the last few decades.

But still, I think there are ongoing issues regarding corruption and malpractice when it comes to construction regulations and supervision – not only in Mexico, but across the world – where building companies sometimes use less robust materials in order to reduce costs. It’s a bit like what the controversy we saw during the recent fire at Grenfell Tower in London.

How long will it be until authorities can ensure that buildings are safe?

Inspecting buildings to assess whether they have structural damage can actually be quite a rapid process. If there are good civil engineers who have experience in post-disaster reconstruction, they can make the appraisals within days. My concern with this kind of disaster is related to the processes that come afterwards, when the limelight fades away and no one is paying attention anymore.

In neighbourhoods that were already well established, there is going to be land speculation. In existing neighbourhoods where low-income families were living side by side with middle- and even upper-class households, there will be a push from private developers to buy up the buildings that were damaged or collapsed, so that they can rebuild costly apartments there instead. So you end up with new buildings that only higher income households can afford.

For example, after the flooding and landslides caused by Hurricane Mitch in Honduras in 1998, some slums and informal settlements - especially those located near river banks – were declared uninhabitable. The scarcity of affordable land in cities was one factor which led to the relocation of low income households far from where they originally lived, and allowed higher income groups and developers to capture many of these vacant plots of land. 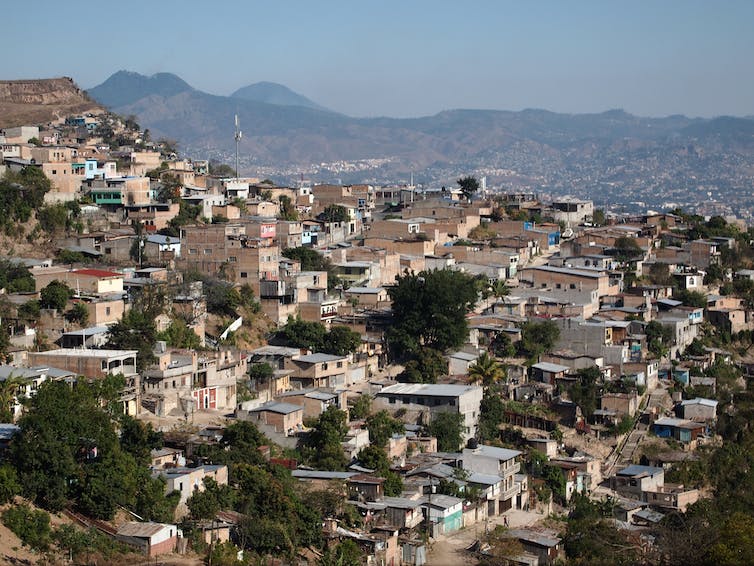 A similar thing happened in Chile, in the city of Talca, where preliminary research has shown that neighbourhoods which were quite mixed in the past have started to become gentrified in the reconstruction process that began after the 2010 earthquake. The problem is that national and local governments sometimes rush to declare certain areas unsafe, not knowing that this opens the way for property speculation, and eventually market evictions.

That’s one of the reasons, if you ask me, that people should not necessarily be permanently relocated or displaced from the places they were living; because that place is their home, it’s near where they work and it’s where their whole social network is located.

So what can be done to help communities stick together and stay in the place they call home, in the wake of a natural disaster?

The most important thing is not to treat people like victims. They have been hit by an earthquake or a hurricane, and they are are in a state of shock, and they will probably need a lot of assistance. But they are the ones who have been affected, and as such, they should be key part of the decisions and reconstruction and rebuilding processes.

External forces, such as governments and aid agencies, as well as architects and engineers, need to help communities to be a part of that process, rather than making decisions on their behalf. Communities need to be active and involved, not just passively waiting for things to happen. The images of solidarity of people working together and helping their neighbours in both Mexico and the Caribbean are therefore encouraging.

Governments and NGOs helping with reconstruction also need to be aware of the social networks and economic activities that local people had before, and try to rebuild those, too.

My main message is: do not relocate people. One of the main reasons that the recovery effort has been so slow in Haiti is that people were moved kilometres away from where they used to live – many are still in temporary shelters almost eight years after the 2011 earthquake.

Experts are predicting that extreme weather events are going to become even more severe – do you think that people living in vulnerable places might one day be forced to abandon their homes?

I answer this with another question: would you ever think of evacuating London because there is a possibility of flooding? And the answer would be no, because we would find the technological and financial resources to invest in making the city more resilient.

Severe and extreme weather events are part of our daily life from now onward, and we have to learn to live with them. Life will continue in the Caribbean, life will continue in Mexico City, and I think that – rather than considering moving people out of these places – we need to be considering what we can do to minimise the impacts of climate change or future earthquakes.

Of course, when you have two hurricanes of this scale hitting you in a row, it’s like having two massive heart attacks one after the other. But there are ways of building with appropriate technology, which can reduce the possibility of buildings being totally destroyed, while making disaster recovery more straightforward.

Instead of people going and living in vulnerable and at risk areas, enact policies that enable people to access safer land with services where to live at an affordable price near the places where they work. Introduce small credit schemes, which enable people to build their own homes to high standards, with technical assistance, while still having the capacity to repay the loans. Invest in infrastructure to stabilise plots and make land liveable. These are the types of measures that we should be thinking of, especially in cities which are very prone to those types of disasters.

Another problem with big disaster stories like those we have experienced in the past month – especially as they relate to the impacts of severe and extreme weather – is that low-income households living in vulnerable areas in cities across the world are suffering more from short and intense torrential rainfall that can cause small landslides or flooding of 10 or 15 houses in a slum in one hour, and intense heat waves that affect elderly and infants and dry out the sources of water nearby. The daily impacts of these weather events is eroding the assets of the urban poor. And because these are not disaster stories, we don’t hear about them.

How can the governments of poorer countries afford to invest in measures like these, to make it easier to deal with disasters when they occur?

Poor people have resources. I’m not just talking about the house that they have already built by their own means; people also have social networks, education, health – they have their own income-generating activities. So you can always rely on those resources that people already possess, to help with disaster recovery and to take adaption measures that help to reduce or mitigate the risk of future weather events.

It’s amazing to see, when you visit the slums, how people are already taking measures; for example, inside their homes they raise their beds and electrical equipment off the floor when they know that the floods are coming. The problem is that academics, aid agencies or governments are not able to see what people are already doing.

Consider that about ten years ago, the majority of houses in the developing world were not built by the governments or private companies, they were built by the efforts of the people. It’s possible to leverage local resources and support people to take preventive measures through partnerships with the public and private sectors – whether that’s philanthropic agencies like the Bill and Melinda Gates Foundation, or private companies and banks. The role of governments is to enable the formation of these partnerships.

By providing better technical assistance, and allocating a small amount of resources to improve the quality of housing, you can effectively mobilise local resources to help solve the problem. Co-financing and micro-lending schemes such as PRODEL in Nicaragua give people the power to make adaptations and take preventive measures, using their own resources together with finance from local government, the private sector or international aid agencies. These types of programs exist in different parts of the world, and more and more you see organised communities having this capacity to negotiate with local governments.

Instead of waiting for services to be delivered, people are saying to their local governments “we will invest our work, our labour, our resources, if you will allow and help us in providing services in these communities”. So when there are these dramatic events, it’s important not to lose sight of the fact that the main resources needed for recovery are already there, and that’s people themselves, with their own capacities, professions and social networks. That is where reconstruction begins.