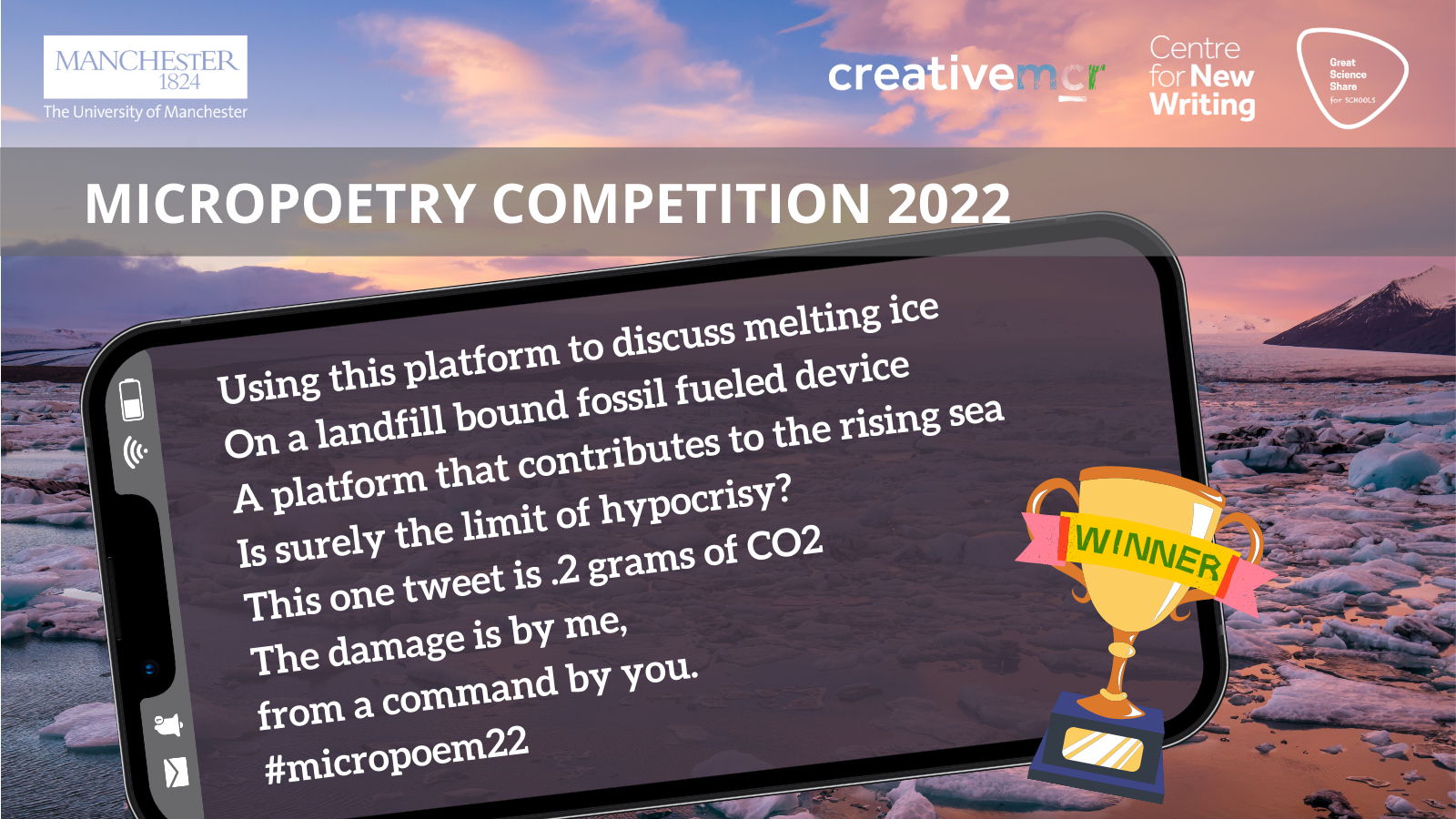 The theme for this year’s Micropoetry Competition of ‘Climate Change’ could not have been more fitting for the judges’ deliberations, which took place on the hottest day on record for the UK (19 July 2022).

Despite the sweltering temperatures, an esteemed panel of judges including former University of Manchester Chancellor and poet Lemn Sissay, Creative Manchester Director and Professor of Poetry John McAuliffe and Manchester-based poet and critic Maryam Hessavi, took a shortlist of the most intriguing of this year’s entries and selected the very best based on their professional judgement and instincts.

This year’s poetry competition took place from 21 March 2022 to 21 June 2022 and was presented by Creative Manchester in partnership with the Centre for New Writing and the Great Science Share For Schools. Entrants were asked to respond to the theme of ‘Climate Change’ in no more than 280 characters drawing on subjects including renewable energy, rising sea levels, protecting our wildlife, the future of our children and the folly of policymakers.

The winning poem was submitted by @AjrCWriter on Twitter which put a mirror up to the judging room in a way that gave the judges pause for thought in their deliberations.

“I love it,” said Sissay. “They are the ones telling us what’s happening. It’s something original. It’s top of the tree.”

“A great poem,” added McAuliffe. “They are thinking with their ears and not just on the page.”

Hessavi noted: “I admire how it speaks to us and the humour of it.”

The first runner-up, submitted by @LChristianer via Twitter was described as “a perfect little poem” by McAuliffe and reminded Sissay of childhood, while Hessavi ruled that it was “brave and it’s a poem that takes a risk”.

Second runner-up submitted by @josephsyard via Twitter was praised by McAuliffe for its lyricism, with the professor telling the room that it demonstrated “really, really great writing”.

In the under-18s category, a poem submitted by Syeda Manha Rashid from Levelshulme High School via email most impressed the judges, with Sissay saying how good it was for a school pupil, while Hessavi was touched by its form and rhyme scheme.

Finally, two more poems were highlighted for commendation from the expert judging panel.

@baztench’s poem submitted via Twitter was described by McAuliffe as “a cracker” for its descriptiveness, while Sissay said he had “never heard the changing seasons described in such a way and with such economy”.

@cathyedmunds’ seasonal poem was also widely praised by the judges, with Sissay declaring that “this is the sort of writing that should be encouraged”.

“Words matter in the world of social media where a well-turned phrase or image can suddenly resonate with thousands of readers,” said McAuliffe. “Poets practice the same skill when they turn a line, maybe not responding always to the contemporary but keeping us in touch with ancient human preoccupations too. This competition, so ably steered by our Chancellor Lemn Sissay, prizes writing which can be both of our moment but also with an eye on a longer life and we are delighted to have had so many brilliant entries again this year.”

The judging session was Lemn Sissay’s last as Chancellor, as his tenure as the figurehead of The University of Manchester came to an end on 31 July 2022. Sissay’s commitment to the competition and to championing creative writing and poetry for the many, not the few, was celebrated by the Creative Manchester team by gifting the Chancellor an ornate writing set that once decorated the Dean of The University of Manchester Institute of Science and Technology’s desk circa 1950-60, as a thank you for his support.

The Micropoetry Competition and its sister competition for local schools are of huge importance to The University’s commitment to Social Responsibility, engaging the general public with poetry and the urgent matter of climate change facing society. Details of next year’s competition will be confirmed soon.