‘Cursus’ is older than Stonehenge
Newsroom

‘Cursus’ is older than Stonehenge 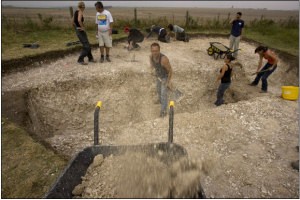 Archeologists have come a step closer to solving the 285-year-old riddle of an ancient monument thought to be a precursor to Stonehenge.

A team led by University of Manchester archaeologist Professor Julian Thomas has dated the Greater Stonehenge Cursus at about 3,500 years BC - 500 years older than the circle itself.

They were able to pinpoint its age after discovering an antler pick used to dig the Cursus – the most significant find since it was discovered in 1723 by antiquarian William Stukeley.

When the pick was carbon dated the results pointed to an age which was much older than previously thought - between 3600 and 3300 BC – and has caused a sensation among archeologists.

The dig took place last summer in a collaborative project run by five British universities and funded by the Arts and Humanities Research Council and the National Geographic Society.

Professor Thomas said: “The Stonehenge Cursus is a 100 metre wide mile long area which runs about 500 metres north of Stonehenge.

“We don’t know what it was used for – but we do know it encloses a pathway which has been made inaccessible.

“And that suggests it was either a sanctified area or for some reason was cursed.”

Professor Thomas believes that the Cursus was part of complex of monuments, within which Stonehenge was later constructed.

Other elements include the ‘Lesser Stonehenge Cursus’ and a series of long barrows - all built within a mile of Henge.

He added: “Our colleagues led by a team from Sheffield University have also dated some of the cremated human remains from Stonehenge itself.

“That’s caused another sensational discovery and proves that burial cremation had been taking place at Stonehenge as early as 2900 BC – soon after the monument was first built.

“But what is still so intriguing about the Cursus is that it’s about 500 years older than Henge – that strongly suggests there was a link and was very possibly a precursor.

“We hope more discoveries lie in store when we work on the Eastern end of the Cursus this summer.

“It will be a big step forward in our understanding of this enigmatic monument.”