'Dancing with your Brain' event takes place at Manchester 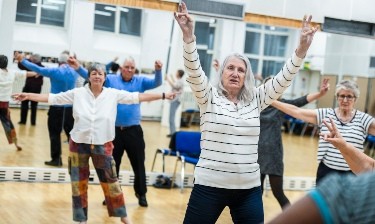 As part of the nationwide Age of Creativity 2019 festival, Dancing with your Brain took place at Z-arts in Manchester on 29 May.

The event was organised by the Body, Eyes and Movement (BEAM) lab, The University of Manchester, in collaboration with English National Ballet and social enterprise Equilibrium International, following on from a pilot project on dance and Parkinson’s.

Researchers in the BEAM lab have been investigating action representation in Parkinson’s and healthy ageing - that is, how we internally represent movement and respond to others’ movement.

Findings from the lab have suggested that watching, copying and imagining can help to facilitate basic movements in people with Parkinson’s.

The researchers are interested in looking at how these processes can be used in everyday life, such as through dance.

Dance involves learning through observation and imitation, as well as using imagery to influence movement.

Research indicates that dance can potentially improve movement and other aspects of well-being for people with Parkinson’s, and the use of action representations in dance may contribute to these effects.

The recent pilot project explored the use of observation, imitation and imagery in dance for people with Parkinson’s, drawing on English National Ballet’s dance for Parkinson’s approach as well as the classical Indian style Bharatnatyam.

Dancing with your Brain gave people both with and without Parkinson’s the opportunity to try a taster session and experience first-hand how action representations are used in dance.

The taster class was led by experienced dance artists Helen Gould and Gayathri Ganapathy and took inspiration from the ballet Firebird as well as Indian textile prints to evoke imagery of elements of nature.

Dance pieces were adapted so that all participants were able to join in, whether standing or seated.

Following the class, attendees were able to learn more about the project from a display of photographs and posters and had a chance to talk to the dance artists, researchers and fellow participants over tea and cake.

Participants found the event “inspiring” and “liberating”, and there was clear enthusiasm for further dance-related activities.