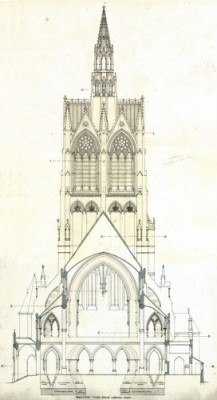 A near 150 year old architectural mystery at one of the city’s most famous churches has finally been solved by academics at the University of Manchester who have digitised the Church’s archives.

Built in 1871, the Church of The Holy Name of Jesus (also known as the Holy Name) famous for having a short rectangular tower and a flat roof, was actually originally designed with an impressive lantern town and spire. But it wasn’t built as it was simply too big for the structure.

The digitisation project solved the mystery after discovering original drawings and plans of the church in the Holy Name’s own archives. The drawings, some of which date back nearly 150 years and predate its construction, show the Grade One Listed building, designed by architect Joseph Hansom, with a beautiful steeple.

If it had been completed the entire tower would have stood at a massive 73 metres (240 feet) high, making it significantly taller than the entrance tower of Owens College (now the University’s Whitworth Hall), located just across the road. But the archives also reveal that, despite the growing costs of the project, it was due to engineering concerns of its size that the spire was not built. Its grandiose design, which would have matched the Church’s imposing Gothic exterior and cathedral-like interior, meant its sheer size and weight was too big to sit on top of the church. This was due to weak foundations and concerns the tower could crumble under the weight bringing the rest of the church down with it.

As the area around the church was dense terraced streets in the nineteenth century it was a risk that couldn’t be taken. So the spire was left off of the finished design giving the Church its now famous flat-top tower. Dr Martin Dodge, Senior Lecturer in the University’s Geography Department, who is leading the digitisation project said: ‘People often think it looks a bit odd with the stumpy square tower rather than an elegant tall church spire. These plans reveal, for the first time, the design of the steeple that was supposed to have been built.’

‘Holy Name Church is a last reminder of a lost community here in this part of Manchester. Although the rows of houses are gone, the church still functions in its new incarnation as a student chaplaincy.’

For local residents and historians it has long been argued that the Church should have had a spire, but this is the first time official records have been found that substantiate the claims. The Holy Name is now home to the University’s Catholic Chaplaincy and the only Grade One Listed building on its campus.

Father William Pearsall, from the Holy Name, said: ‘It was really great working with Dr Dodge on this project. Holy Name Church is a last reminder of a lost community here in this part of Manchester. Although the rows of houses are gone, the church still functions in its new incarnation as a student chaplaincy.’

Dr Dodge added: ‘The Holy Name Church is an architectural icon on Oxford Road but always overlooked by busy academics and students. Many spend years at the University and pass by every day and never look inside.

‘I often walked past the Church and it always intrigued me, especially as it shares so much history with the University and surrounding area. I am delighted we have been able to shed new light on the Holy Name and share it with the public.’

As well as solving the mystery of the Church’s spire-less appearance, the digitisation project is also significant as it will help preserve these key architectural drawings and make them freely available to the public. Due to their age and storage conditions in the church’s archive, the fragile originals are deteriorating due to a chemical breakdown in the paper known as ‘foxing’. This leaves large brown spots on the documents meaning the original details will one day become unrecognisable.

The digitisation project was a collaboration between the University of Manchester’s School of Environment, Education and Development (SEED) and the Catholic Chaplaincy. The digitised architectural drawings of the Holy Name Church can be accessed at https://flic.kr/s/aHskCa2FJF