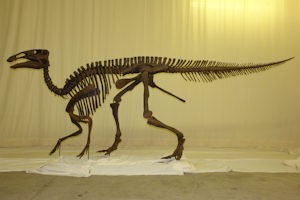 Dinosaurs have literally been put through their paces by a new supercomputer, allowing scientists to get closer to understanding how they once moved.

The team – from The University of Manchester, University of Oregon and Yale - set up the ‘dinosaur dressage’ with the help of Hector, the UK Research Council’s supercomputer, currently the 20th fastest super computer in the world.

They found that hopping hadrosaurs were fastest but – for safety reasons - a two-legged running gait was most likely. In the same way that we can all muster a John Cleese ‘silly walk’ few can sustain it!

In addition the team, funded by National Geographic and The Natural Environment Research Council, has shown how more research can be done to find out how large and fast animals moved, both living and extinct.

In the meantime, Jurassic fanatics can simulate their very own dinosaur as the software (Windows, Mac, Linux) and models are freely available to download from http://www.animalsimulation.org.

Team leader Dr Bill Sellers, whose results are published in Palaeontologica Electronica this week, explains: “Everyone knows that dinosaurs come in all shapes and sizes. Most don't look like anything that's alive today and some are just plain bizarre. One group that fit this description well is the duck-billed dinosaurs, also known as hadrosaurs. Along with the strange appearance – the eponymous duck-bill, peculiar skull ornaments, and long, slender forelimbs – scientists have argued about how they might have moved. Did they walk on four limbs, two limbs, or a combination of both depending on the speed? It has even been suggested that some may have hopped like a kangaroo!

“Previously we have used computer simulation to calculate the top running speed of a range of two-legged dinosaurs. It turns out that looking at all the possible locomotor options in a single four-legged dinosaur is actually much trickier. Much like a dressage trained horse, the basic body shape is capable of using a whole range of possible gaits even though it is likely that it would much prefer some over others.”

His colleague Dr Phil Manning, a palaeontologist at the University of Manchester, says: “Hadrosaurs are a much overlooked group of dinosaurs, often coming second place to the predators, such as their contemporary T. rex. However, in this running race, it seems that the hadrosaurs had the edge on the predators...not surprising if they wanted to survive in a landscape shared by the largest predator on Earth.

“Fortunately for us Hector had just come online and could provide sufficient computational power for the job. We gave the computer simulation a completely free rein to come up with whatever form of locomotion it could. And indeed from a completely random set of starting conditions the model generated a full range of possible gaits: bipedal running and hopping as well as quadrupedal trotting, pacing and galloping.

“The big surprise was that hopping gait came out as fastest at 61 km/h, followed by quadrupedal galloping (58 km/h), and bipedal running (50 km/h).”

Dr Sellers, based at Manchester’s Faculty of Life Sciences, adds: “We also looked at how these different ways of moving would apply forces to the skeleton. Here hopping came out the worst: if the hadrosaur had moved like that it would have destroyed its own skeleton.

“In the end bipedal running came out as probably the best compromise between performance and skeletal loading. But the really clear message is that there is still more research to be done particularly looking at how large and fast animals can move within the margins of safety required by their skeletons.”

Images and film footage of the research are available.

More information and simulation software and models are available at http://www.animalsimulation.org/index.php?option=com_content&view=article&id=50.