Dr Robert Szymanek , teacher of gamelan - the traditional music of Java and Bali - at The University of Manchester, brought an energetic set to the Siam main stage of this year’s WOMAD festival. 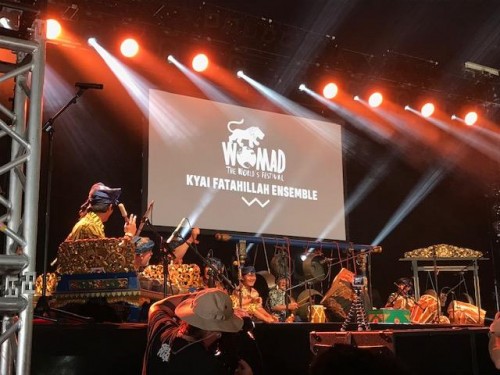 The world arts and music festival, which took place in the grounds of Wiltshire’s Charlton Park in July, was founded in 1980 by rock musician Peter Gabriel and has grown into an international event, with WOMAD festivals taking place in Australia, New Zealand, the UAE, Spain, Italy and Chile.

The group brought together a band of musicians and students from Bandung, West Java, and fellow gamelan players and teachers from the UK for what Songlines Magazine called an 'invigorating set', which included music, songs and dances from Sunda, a little-known region of the island of Java, where the music is highly dynamic and often full of wild energy.

“It was a real honour to perform alongside Iwan and the other musicians and dancers,” said Dr Szymanek. “I absolutely love this music, and I’m so pleased that students can study it at Manchester. It’s really a unique form of gamelan, with so much to discover and transfer to other kinds of music practice. Plus, it’s such a lot of fun!”