EEE student runner-up in UKESF Scholar of the Year 2020 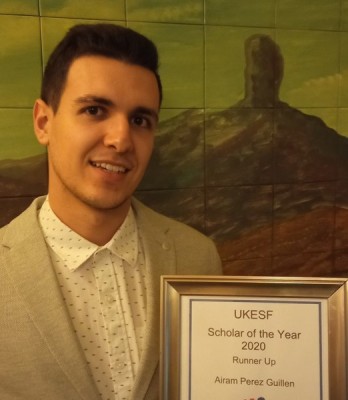 Airam Perez Guillen, a third-year student in the Department of Electrical and Electronic Engineering, has been awarded second place in the UK Electronics Skills Foundation (UKESF) Scholar of the Year 2020.

The annual award recognises students who have contributed to electronics and to incentivising other younger students to choose to study electronics in the future.

Airam has been recognised for his abilities as an engineer, which include his academic achievements, but also for his wider engagement within the field. This covers, for instance, industrial placements and providing a meaningful contribution to inspiring future generations to study engineering.

During his studies, Airam has undertaken a placement year with EDA Solutions, which has also contributed directly to this award.

This is a significant and well-deserved achievement for Airam. As well as being a very capable student, he provides a significant contribution to the Department in terms of representing and supporting other students. It is fantastic to see that the UKESF have also recognised his achievements in these areas.

EEE student runner-up in UKESF Scholar of the Year 2020