The 2017 election campaign in voters’ own words 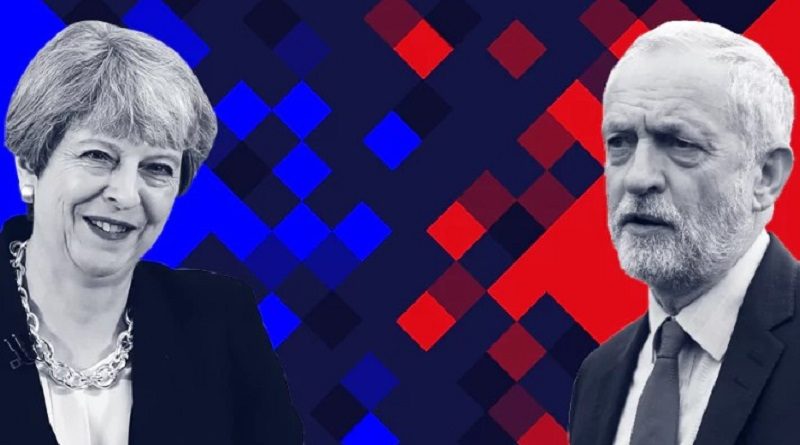 The 2017 election campaign was the most remarkable in recent British political history. As the dust settles on the election, many politicians and commentators have put their spin on why the campaign saw such dramatic changes in vote intentions. But what did the voters themselves think? What issues were they most concerned about, and what happened to change their minds about the parties?

The campaign wave (wave 12) of the newly released British Election Study Internet panel data provides a unique resource with which to explore the dynamics of this dramatic campaign. From the day after the local elections (May 5) to the day before the election (June 7), we surveyed a randomly selected subset of our panel on each day, giving us a sample of about 1000 people every day of the campaign. In this blog I am going to explore the answers respondents gave to two open ended questions and how these changed over the campaign, using wordclouds to visualise the results. In the wordclouds shown here, the relative size of each word is determined by its frequency in respondents’ answers to each question –more commonly a word was used by respondents, the bigger it appears in the wordcloud.

First, a caveat: wordclouds are a great way of getting a first impression of prominent themes in text data but they can also be misleading in a number of ways. First, we can’t necessarily tell whether people are saying positive or negative things about prominent words. For example if one person says ‘making sure Brexit happens’ and another says ‘stopping Brexit’ then both of these will contribute to the prominence of the word ‘Brexit’ in the wordcloud, even though the two respondents are saying very different things about it. Second, if people use different words when they are talking about the same thing, such as ‘social care’ or ‘dementia tax’, then those individual words will look less prominent than overall importance of that issue in people’s answers. Third, in the animated wordclouds that show the answers for each day, the size of the words is only determined by the relative frequency of words within each day of the campaign, and not between days. If the frequency of other words changes, a word might be the same size on two days even if it is actually mentioned more on one day than the other. Word clouds can still tell us a great deal about how the campaign evolved but we should keep in mind that they are not without their problems.

The most important issue

One of the first questions BES respondents are asked is ‘as far as you're concerned, what is the SINGLE MOST important issue facing the country at the present time?’ The animation below shows how these responses evolved over each day of the campaign. From the beginning of the campaign, ‘Brexit’ is clearly the most prominent issue, with 47% of respondents using the word on the day one of the survey. Other issues that feature prominently are immigration, the NHS, and the economy, though these are dwarfed by the importance of Brexit.

Brexit remains the dominant issue for the first two weeks of the campaign, though immigration and the NHS both increase in prominence (as does the issue of the election itself). Unsurprisingly, following the terrorist attack in Manchester on May 22, terrorism suddenly increases in prominence, initially becoming equally important to Brexit, and then on May 25, the most important issue. Over the following week, terrorism gradually decreases in prominence, before returning again on June 4 following London Bridge attacks the night before. Terrorism remains the most frequently mentioned word for the final three days of the campaign.Despite its relative absence from the Conservative and Labour campaigns, Brexit was clearly the dominant issue on voters’ minds during the election campaign.

Across all of the days of the survey, about one in three voters used the word Brexit when we asked them what they thought the most important issue facing the country was. We examine the importance of Brexit to how people case their vote in a separate blog, which also includes a word cloud of these most important issue questions pooled across days.

What changed people’s minds about the parties

Towards the end of the questionnaire, we asked our respondents a new question that we asked for the first time in wave 12: ‘has anything happened in the last few days that has changed your view of any of the main political parties?’ Most respondents had clearly made up their minds about the parties well in advance of the election, with only 13% answering ‘yes’ over the whole of the campaign, though as the graph below shows, this proportion increased markedly over the course of the campaign, starting out at about 7% in the first week before increasing to an average of about 15% for the final weeks of the campaign. 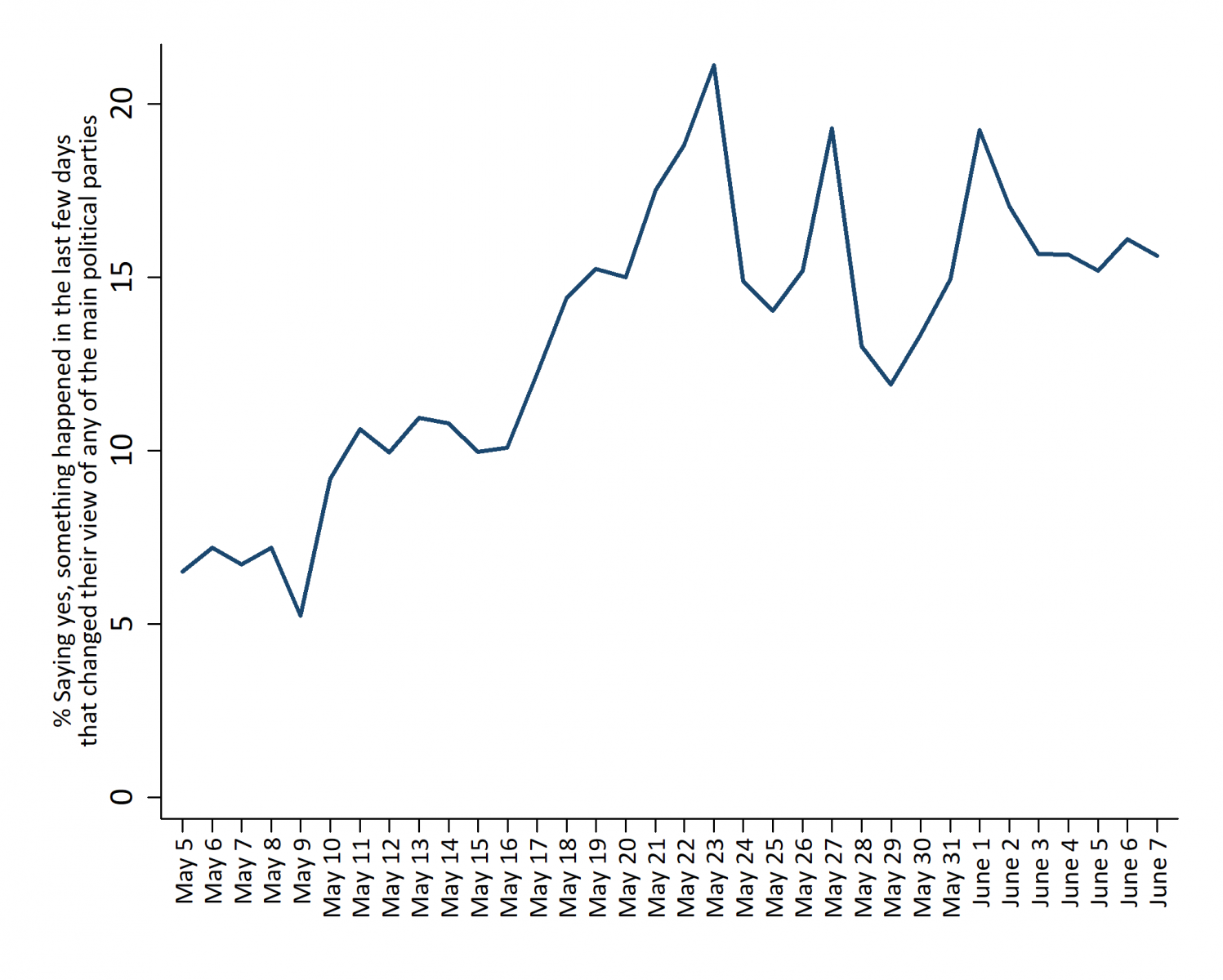 For respondents that answered yes to this question, we asked them an opened ended question about what it was that changed their mind about one of the parties. The animation below shows the evolution of these responses over the course of the campaign. Note that because they are frequently mentioned alongside the specific issues that people mention, I have removed the names of the parties and party leaders from the clouds. Without doing that the wordclouds would be dominated by these names throughout the campaign and we would not be able to see the specific issues that people mentioned in their responses.

At the start of the campaign wave, when not many respondents said something had happened that changed their mind about the parties, the largest word is ‘Abbott’ – a consequence of Diane Abbott’s interview about police funding a few days earlier. Other issues that appear in the first few days are the local elections (in particular people commenting on Labour’s poor performance and the evaporation of the UKIP vote), the triple lock on pensions, and Brexit.

On May 10, following Theresa May’s announcement the previous day, fox hunting briefly dominates responses. However, the leak of the Labour manifesto the next day quickly takes centre stage, with the word ‘manifesto’ being the most common until May 23. From May 18 onwards, ‘social care’ and ‘dementia tax’ steadily rise in prominence, until ‘care’ is the largest word on May 23 and remains prominent thereafter.

The aftermath of the Manchester bombing brought with it many respondents critical of the government’s handling of terrorism and security (and quite a few respondents saying they were unhappy with both parties for trying to score political points in the wake of the attack).

Following Corbyn’s late appearance and May’s nonappearance in the BBC leader’s debate on May 31 many respondents make debate related comments and the word ‘debate’ becomes the most common word for the next four days. Amongst these respondents, the most frequent comment was not anything that happened in the debate itself, but rather the fact that Theresa May hadn’t bothered to show up at all.

In the final few days of the campaign, the London Bridge attacks bring with them renewed concerns about terrorism, and in particular, anger about police cuts.Together, these responses paint of a picture of the campaign influenced by a combination of the policies, campaign interviews and (non)appearances made by party leaders, and unforeseen and tragic events. Undoubtedly, these things influenced the outcome of the election and resulted in one of the most dramatic polling shifts ever seen over the course of the campaign. It is important to remember though that the vast majority of respondents said that nothing happened during the campaign that changed their view of the parties. A small minority may have been influenced by the campaign, but most had made up their minds long before.

The 2017 election campaign in voters’ own words