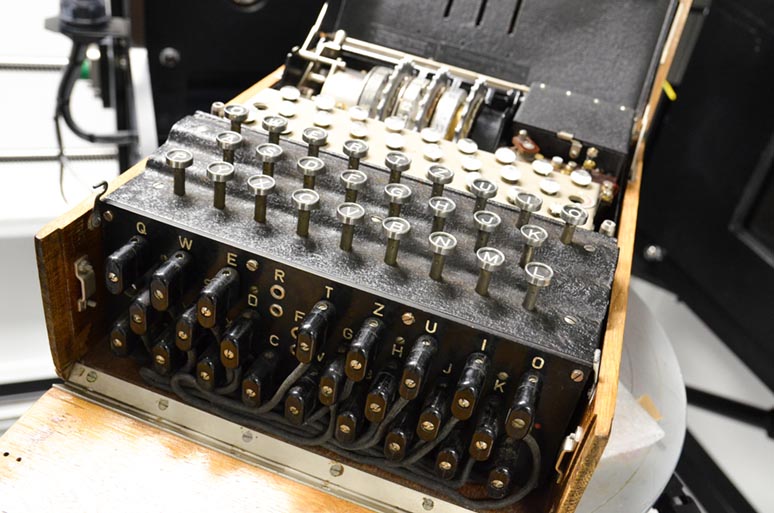 Over two days (13-14 Nov) The Alan Turing Building played host to a genuine 1941 German Army Enigma machine so it could be X-ray scanned by the Henry Royce Institute.

The machine is a basic three rotor German Army Enigma machine. It was made in Berlin in 1941 and believed to have been shipped to the Austrian Federal Ministry of the Interior in Vienna (this was only discovered in 2014, when a copy of the delivery manifest was discovered).

There were about 40,000 Enigmas made and it’s estimated that there are less than 300 remaining (the Enigma Museum now maintains the Register and has 274 machines listed).

The machine is typically held on display at Bletchley Park, once home to codebreakers during World War II.

Materials science researchers based within the Alan Turing Building scanned the Engima using the latest technology in the Henry Moseley X-Ray Imaging lab. The X-Ray CT techniques used will aim to provide a unique look inside the legendary cipher machine, producing images which can be constructed into a 3D model.

James Carr, a reasearcher from the School of Materials, explains the process:"The Enigma machine was imaged using a focused beam of high energy X-rays. We collect over a thousand “shadow images”, otherwise known as radiographs, from lots of different angles and then use these reconstruct a 3D image with the help of some clever mathematics! I took a total of 6 scans at different locations within the machine which will be stitched together to form a 3D image of the full Enigma machine. This image will hopefully be used for public engagement and outreach so that people can interact with a true 3D representation of the Enigma machine."

Speakers from the School of Maths and Computer Science also gave talks on their perspective on Alan Turing and his enduring legacy at the University of Manchester.

You can see more images of the Enigma on our flickr page.