European tornadoes are real and their threat is underestimated
Newsroom

European tornadoes are real and their threat is underestimated 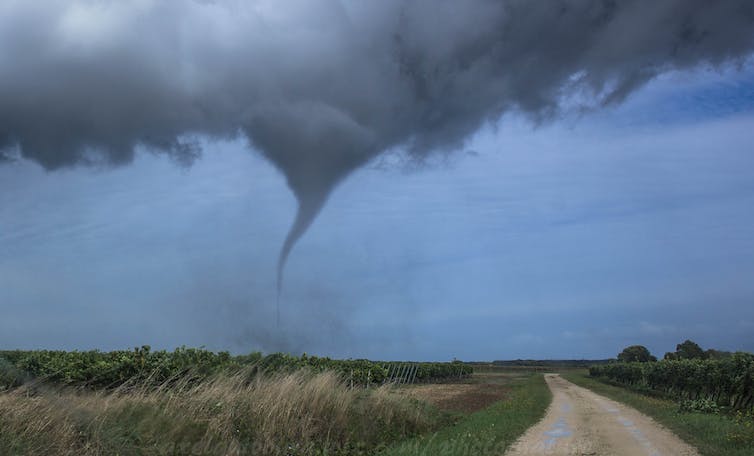 A tornado in the town of Sonnac, France, in September, 2015. Axel Guibourg/wikimedia, CC BY

It is often assumed that tornadoes do not occur in Europe and that they are a weather phenomena specific to the United States. But this is far from true. Not only do tornadoes strike in Europe – they do millions of pounds worth of damage, cause serious injuries and even lead to fatalities. Despite these facts they are still perceived as a curiosity and as a result their threat is underestimated.

Tornadoes have not always been overlooked in Europe and many natural philosophers and scientists have proposed theories about their formation and impact. Theories were proposed by Greek philosophers such as Aristotle in Meteorologica and Roman philosophers such as Seneca in Naturales Quaestiones. The systematic study of European tornadoes began in the 17th-century. Writing in 1694, the Italian astronomer and mathematician Geminiano Montanari analysed a tornado that occurred in the Veneto region of Italy in July 1686.

In fact, before the end of the World War II, European scientists and meteorologists led the research into tornadoes while in the United States the word “tornado” was banned by the Weather Bureau because the government was afraid of causing panic. But the situation changed in March 1948 when Air Force Captain Robert C. Miller and Major Ernest J. Fawbush issued the first US tornado forecast and, as a result, the United States began to surpass Europe in the study of twisters.

After 1950, the interest of European researchers and meteorologists declined, despite the occurrence of high-impact tornadoes. For example, in June 1967 six tornadoes resulted in 232 injuries and 15 fatalities in France, Belgium, and the Netherlands. There has also been regular less intense tornadoes doing damage throughout Europe, such as the ones that tore through several streets in north-west London in 2006 and Birmingham in 2005. Despite these incidents, there has still been a general lack of interest resulting in a lack of tornado databases which in turn lead to the threat being downplayed.

Over the last two years, my colleagues and I have tried to change the general public opinion – and even the opinion of some researchers and meteorologists – concerning European tornadoes. The aim is to show that tornadoes do occur in Europe, although their reported frequencies and intensities are lower compared with the United States.

Our research focused on developing a pan-European baseline climatology of tornadoes and waterspouts (a tornado over a body of water). We synthesised tornado and waterspout observations across Europe between 1800-2014 to understand the spatial and temporal distribution of these weather phenomena.

The synthesis was based on regional tornado sightings and articles published in peer-review journals for 30 European countries which contained 9,563 tornadoes and waterspout reports. These reports came mainly from western, southern and northern Europe, with just a few reports coming from Eastern Europe where databases were only developed after 1990.

We showed that tornadoes in Europe need to be taken more seriously. Between 1950 and 2015, European tornadoes resulted in 4,462 injuries, 316 fatalities and damages estimated at more than €1 billion. To increase awareness about tornadoes in Europe and to reduce their threat we believe that meteorological services across the continent, including researchers and the general public, need to collaborate more.

The threat can only be understood from a pan-European perspective. The tornado impact for individual countries will be perceived as low because European countries have relatively small areas and so the number of tornadoes will be low when compared with the impact in the US. A low impact will not justify the investment in the development of tornado databases and development of warning systems.

The contribution from the general public is essential. Unlike temperature records which are measured by thermometers, tornado records require the presence of an observer and the existence of a system for collecting the observations. Such systems to collect tornado reports have only been developed recently. Citizen science projects – such as the European Severe Weather Database were the general public can submit tornado reports which are then verified by meteorologist and researchers – are the most efficient way to develop a pan-European tornado database.

After being virtually ignored for more than 60 years, tornadoes in Europe are again a topic of research and discussion among academics and meteorologists. Despite the increased awareness of tornadoes, there is still more to learn about their spatial and temporal distribution and, maybe more important, about their impact.