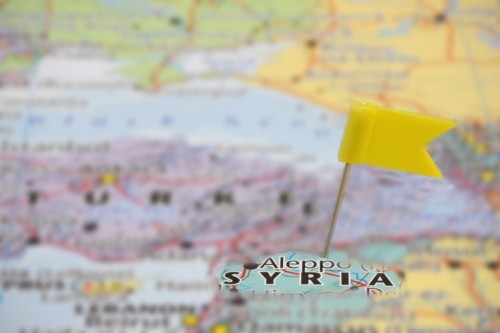 Map Of Syria With Flag

As MPs prepare to vote on air strikes in Syria, University of Manchester academics are available for media comment.

Dr Piers Robinson, a senior lecturer in politics,  researches communication, media and world politics with a particular focus on conflict and war at nd the role of propoaganda in the context of the Middle East and the 'War on Terror'.

He said: "As British leaders debate air strikes in Syria, it is essential to address the underlying causes of the ISIS attacks. ISIS has developed in the context of a regional conflagration in the Middle East precipitated by the US invasion of Iraq and there are multiple regional and global actors involved.

"Such critical analysis is even more important given the experiences of the last 15 years which have borne witness to propaganda and manipulation on all sides, aggressive military responses to acts of terrorism and, amongst many other events, two disastrous wars in Iraq and Afghanistan.

A decision to launch air strikes is likely to do more to fuel the cycle of violence we are now experiencing than to mitigate any threat."

Professor James Pattison is a Senior Lecturer in Politics at The University of Manchester who has written widely on humanitarian intervention, the responsibility to protect, and the ethics of war.

He said: “Any intervention in Syria against ISIS is likely to be very morally problematic and illegal, with unclear objectives and innocent civilians will be harmed. The case for intervention has not changed, despite the events in Paris and Brussels. The possibility of a UN Security Council resolution may, however, strengthen the case and would render the action legal. But even UN-authorised military action is likely to be morally problematic.”

But Professor Iain Scobbie who is an expert in international law. He said: “Resolution 2249, which was adopted unanimously by the UN Security Council on 20 November 2015, does not authorise member States to use armed force against ISIL in Syria.”

Professor Scobbie can provide a detailed explanation about the UN Security Council’s resolution 2249 and his view is that the UK will breach international law if it extends airstrikes against ISIL in Syria.