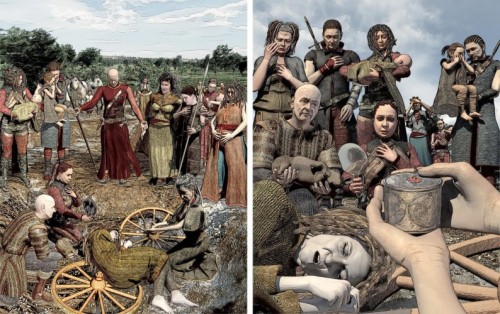 Today an important Iron Age settlement has been unearthed by builders in east Yorkshire Major during housing development at Pocklington.

It is being billed as one of the most significant discoveries of recent times and could date back as far as 350 BC to the time of the Roman conquest.

Archaeologist Dr Melanie Giles from The University of Manchester said: “This is a unique opportunity to investigate the origins of the British, using the largest population we have from Iron Age Britain.

“The latest scientific research suggest most of these people are born and brought up locally, but there are a few, rare incomers - bringing with them new ideas about Celtic art and burial. One of them might be amongst this new cemetery!

“Only detailed analysis of their remains, alongside their exquisite weapons and jewellery, will tell us about the ways in which the ancient British embraced those migrants and were inspired by them to create new and stunning pieces of Celtic art."

Dr Melanie Giles is a Senior Lecturer in Archaeology at The University of Manchester and her research area is Iron Age burial, Celtic art, and Bog Bodies.

This is a unique opportunity to investigate the origins of the British, using the largest population we have from Iron Age Britain