The latest news about alumni 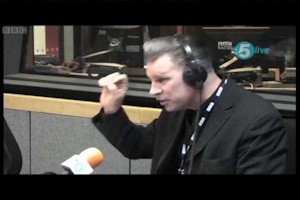 He co-presents The Culture Show on BBC Two and is a familiar face on arts shows such as Newsnight Review.

He has written also extensively on film for publications The Observer, The Independent, Sight and Sound, New Statesman, and Fangoria.

Outstanding Alumni Awards are presented each year by The University of Manchester Alumni Association to former students who have achieved distinction in their field or have brought honour to the University through their outstanding achievements.

Born in Barnet, North London, in 1963, Dr Kermode began working as a journalist while still an English undergraduate at The University of Manchester in the early 1980s, reviewing films for Manchester’s City Life magazine.

He stayed in Manchester to pursue a PhD in modern English and American horror fiction, which he gained in 1991, before moving to London to write for publications such as Time Out and the NME.

It was during his at Time Out he got his first break in broadcasting: LBC Radio was seeking a film reviewer. Dr Kermode volunteered and his passionate, opinionated and knowledgeable style became an instant success.

He was subsequently invited to become the film reviewer for BBC Radio Five. From there it was a short jump to Radio 1, first with Mark Radcliffe, then with Simon Mayo and later, television.

He has written and presented several television documentaries and authored a number of books on film.

In 2004 he jointly curated a ‘history of the horror film season’ at the National Film Theatre in London with his wife Linda Ruth Williams, Professor of film studies at The University of Southampton. His autobiography, It's Only a Movie, is due to be published in early 2010.