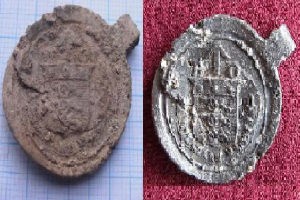 A series of archaeological finds in Tasmania have shown how colonial guards secretly eased the brutal treatment of women prisoners in 1850s Australia, rewriting our understanding of life inside Britain’s colonial prisons Down Under.

University of Manchester archaeologist Dr Eleanor Casella says the find of textile manufacturing paraphernalia in a Tasmanian prison nursery proves women prisoners were allowed informal contact with their babies - a contravention of official British policy for the management of imperial convicts.

They were put to use making convict uniforms out of cotton and woollens imported from the textile factories of north-west England.

The lead seals – which prevent theft from the bolts of cloth during export down to the penal colonies –were found alongside fragments of buttons, sewing pins and thimbles.

Dr Casella has been excavating at the Ross Factory site for over 15 years. She said: “Strict official regulations kept criminal mothers separated from their children. It was a dark period for many thousands of people.

“But the bale seals and other textile-related fragments we found suggest the Ross Factory Superintendent ignored formal orders and allowed women to complete their required work assignments in the company of their children.

“That was a very direct and never documented subversion of the formal British penal regulations that governed this penal colony.

“So though it was a dark and brutal period, these artefacts attribute a human side to the colonialists.”

The Superintendant at the time was Dr Edward Swarbeck Hall, a minor figure in Australian colonial history.

As Swarbeck was known within Tasmania as a “thorough disciplinarian”, historians will now need to modify their appraisal of him.

Officially, the women were not allowed to see their babies within the Ross Factory nursery other than for breast feeding.

At the age of three, the ‘convict babies’ were transferred to the Queen’s Orphan School in Hobart Town, approximately 70 miles away from Ross.

However, evidence is also emerging that the prisoners appealed to the Governor who quietly allowed them to find work close to their children once they had left prison.

Dr Casella said: “We have no way of knowing if these acts of kindness happened across Britain’s penal colonies – but I suspect they did.

“It’s one thing to concoct draconian rules 8,000 miles away in London - but to make a society function properly, the local hierarchy had much to gain from letting people get on with their lives.”

One of the lead seals was impressed with the stamp of the Royal Army Ordnance Corp -- the branch of Her Majesty's Army charged with provisioning the Imperial prisons throughout the Australian penal colonies.

They are about an inch in diameter and were used as a security seal which was pressed into the cloth to show if it had been tampered with.

The seals, currently in Manchester, have been conserved and cleaned at the Museum of London, and will be returned to the Queen Victoria Museum in Tasmania to join permanent exhibitions.

The excavation and conservation of the bale seals was funded by a British Academy grant.

Dr Casella is available for interview

The Bale Seals and other artefacts, currently at The University of Manchester, can be photographed on request