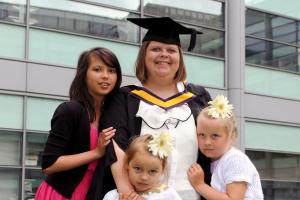 Karen Buckle always knew that if she did it at all she would graduate with first class honours at The University of Manchester, despite being autistic and a single mother of three who had also found the time to start up and chair the European self help organisation Autscape.

But even she was also surprised and pleased to find she had achieved the highest mark on the Cognitive Neuroscience and Psychology course and also won one of only five Wellcome Trust Studentship Bursaries to study a Masters in Health Care Ethics and Law.

“My result wasn’t an alternative to a poorer but okay result, it was actually the only way I could have completed it at all,” Karen, 34, explains.

“There is a fine line between first class degree and complete failure for me, and a number of times I have teetered on the edge. Only the support of significant people in my life, including my autistic friends, my Disability Support Officer Bryan Coleman, National Autistic Society advocate Norman Darwen and personal tutor Liz Sheffield at the University, kept me from failing completely.

“If I get it done at all, I do well, but not getting it done or falling apart were significant risks.”

When Karen came for her interview at the University, she was asked if she thought autism was a disorder or a continuation of the spectrum of normal. She answered, “both”.

“Autism is naturally occurring,” Karen, who has high functioning autism known to some as Asperger’s syndrome, says.

“It’s too much of a good thing so it creates problems. The good things are being very perceptive in picking up details really well and very in tune with sensory information, and having very strong and intense focus.”

Karen has had a long journey to graduation. Born in Canada, she was believed to be severely autistic and mentally retarded. Unable to speak properly until six years old, she was re-‘diagnosed’ as gifted at eight. She was bullied throughout her school career until, at 16, she won a scholarship to attend a private school where “bullying just was not tolerated and I didn’t have to hide how smart I was because intelligence was admired rather than shunned”.

But without a proper diagnosis and thus support for her Asperger’s, and with family problems to contend with, she failed to apply for university and fell apart when she had to leave the routine and security of school. Several tough years followed in which she was hospitalised with depression, got pregnant with her first daughter Kendra then fought to get her back when they took her into care.

At 23, she was finally re-diagnosed properly with high functioning autism. She also met her British husband online, moved to Britain to be with him and had two more daughters, Antonia and Erin. When Antonia was a baby, she passed an access course for university and – after a long battle with her support worker for assistance – filled in her UCAS form. Karen recalls: “She thought I should learn simple things like how to clean my house, but I am much better at this.”

Karen chose her course because she wanted to know more about her condition and was interested in psychology generally: “I have spent her whole life trying to figure out people – I hoped that studying psychology would help.” It was a good choice – she learned how the brain works and, while helping with a research project, got her brain scanned to “show off” to her tutorial group.

“I got one perfect mark for an essay, on Theory of Mind,” she recalls.

“I thought this is a bit unfair, this is my specialist subject. Theory of mind is about what people with autism don’t have – the ability to tell what other people are thinking from their facial expression and understand that other people don’t necessarily know what you know or can be wrong.

“But I was being tested on knowing it, not having it.”

Still Karen had much to overcome due to her Asperger’s. Sensitive senses and need for predictability made her two-hour commute from Northwich to Manchester on unreliable trains that screeched as they passed over railway line points an ordeal. Once in lectures, she struggled to concentrate on the words she would have to write up afterwards – being unable to listen and make notes – as speakers buzzed, microphones sounded feedback and fluorescent lights flickered. She also struggled to work in noisy labs where students had to form and work in groups.

“Sometimes it took everything I had just to endure the hour until I could escape,” she says.

“I could never escape a lecture because it would require too much initiative to break the fixed activity of sitting in the lecture and I wouldn’t want to attract attention.

“Going to lectures, and especially to labs, took so much out of me that I did absolutely no work at the same time as attending. I would learn everything and write my assignments in revision periods. Plus I couldn’t work in the holidays because my three daughters were at home.”

In addition, she founded and chaired the organising committee for Autscape, an organisation of autistic people who run an annual conference for autistic people in the UK, for which she won second place in the University’s Student Volunteer of the Year awards. She also gave autism training presentations across Europe.

Karen succeeded, as she knew she could, in part thanks to the support of staff at the University, her friends and family, and her classmates.

“I told my tutor group about my autism at our first meeting and they have been really great,” she says.

“I even hired one as my support worker. She got me included. I thought I didn’t need to feel included but once when we went for sandwiches, they waited for me outside the shop, and I was thrilled.”

Karen will spend graduation day with her friends, including her ex-husband and new partner, and her daughters, Kendra, 13, Antonia, seven, and Erin, five.

“I’m not sure the girls understand what it means but I once sarcastically said to Kendra, ‘I might be smarter than you think’ and she said, ‘that’s not possible’, which was lovely,” she says.

“I have found my home in academia. So much of my life has been focussed on what I can’t do and now I am in a place where I am good at something. I feel proud and terrified and amazed. I made it.”

For more information or to arrange an interview with Karen Buckle, Liz Sheffield or Bryan Coleman, contact Media Relations Officer Mikaela Sitford on 0161 275 2111, 07768 980942 or Mikaela.Sitford@manchester.ac.uk.

National Autistic Society guidelines on interviewing someone with autism are also available from Mikaela Sitford.