First digital music made in Manchester 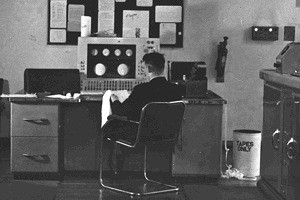 Computer scientists and engineers at The University of Manchester took part in the first ever recording of digital music in the early 1950s, it has been revealed.

Evidence of the achievement has come to light in the form of an astonishing audio recording that has emerged from the archives of the Computer Conservation Society.

The Ferranti Mark 1 computer – the immediate successor to the famous ‘Baby’ computer – is heard playing God Save The King, an aborted attempt at Baa Baa Black Sheep and finally a truncated rendition of In The Mood.

The recording was done during a visit to The University of Manchester by the BBC’s Outside Broadcasting team in the autumn of 1951.

The Ferranti Mark 1 played a series of tunes for the programme Children’s Hour – and after the recording had been completed, one of the engineers, Frank Cooper, asked if it would be possible to get his own copy of the recording.

He was told this could not be done due to copyright issues – but the BBC team agreed to make a separate, one-off recording on a single sided acetate disc of the Mark 1 playing three songs, which was then given to Mr Cooper.

The recording was later passed to the Computer Conservation Society and then taken to the National Sound Archive, where it was transferred to audio cassette.

The recording has been unearthed during the preparations for Digital 60 Day on Friday 20 June 2008 – the 60th anniversary of the birth of the ‘Baby’ or Small Scale Experimental Machine (SSEM), which is the forerunner of all modern computers.

The Computer Conservation Society says it’s not aware of any earlier recordings of computer-generated music.

‘The Baby’ successfully executed its first program in Manchester on 21 June 1948. That program was written by Tom Kilburn who designed and built the machine at The University of Manchester with the late Freddie Williams.

Chris Burton, a leading member of the Computer Conservation Society and the engineer who led the team who built a replica of The Baby in 1998, said: “The Mark 1 had an instruction in its order code called ‘Hoot’. If a programmer used that in a program then the loudspeaker emitted a brief tone. It was used for warning about end of program. All Ferranti computers had the feature in one way or another.

“In 1948 the mathematician Alan Turing came to the University of Manchester and started using and working on the Mark 1. In 1951, Turing invited a friend of his called Christopher Strachey to write a draughts program for the machine. When it terminated Strachey had programmed it to use the ‘Hoot’ instruction in such a way that the machine played the tune God Save the King.

“Strachey was then persuaded to create a music program that could load and play any tune. Later, it became traditional for all Ferranti maintenance engineers to write a music program for each new type of machine.”

In an introduction to the 1951 recording, the late Frank Cooper says: “At that time Alan Turing was in charge of the programmers and had in facts written a programmers manual. He sent a copy of this to a friend of his [Christopher Strachey] who was alleged to be a maths master at one of the better known public schools.

“The outcome of this was that [Stratchey] was invited to write a program and bring it up to Manchester and try it out on this brand new computer. In due course he arrived with sheets of paper and installed himself a tape punch and laboriously transcribed his program onto punch paper tape, which was the done thing in those days.

“He successfully accomplished this task and put the tape into the computer. It obviously worked, the program ran and to the astonishment of everyone in the room, the computer started to play the national anthem in a very raucous manner. We were all agog to know how this had been done.”

“Eventually word got around that this marvellous computer – or the electronic brain as it tended to be called by the press in those days – and everyone wanted to hear this.

“One of the groups that came along at the time was a recording crew from BBC Children’s Hour. In those days the machine wasn’t all that reliable but we managed to get it working for the necessary four or five minutes for the BBC to make a recording of various tunes that had been written for the computer and they were all very happy.”

For more information on Digital 60 Day on please see www.digital60.org.

An MP3 recording of the Mark 1 playing the songs God Save The King, Baa Baa Black Sheep and In The Mood is available

An MP3 recording of the introduction by Frank Cooper is also available.

A selection of images, video and audio is available to support coverage of Digital 60 Day on request.