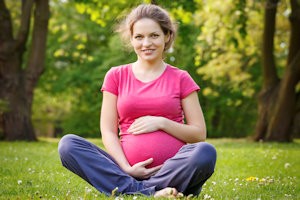 For the first time researchers in the UK have studied the effects of yoga on pregnant women, and found that it can reduce the risk of them developing anxiety and depression.

Stress during pregnancy has been linked to premature birth, low birth weight and increased developmental and behavioural problems in the child as a toddler and adolescent, as well as later mental health problems in the mother. A high level of anxiety during pregnancy is linked with postnatal depression which in turn is associated with increased risk of developing depression later in life.
While it has long been assumed by medical professionals that yoga can help reduce stress levels in mothers, it had never been tested in a research setting. But in a paper published today in the journal Depression and Anxiety, academics, from Manchester and Newcastle Universities, show that women who attended a yoga class a week for eight weeks had decreased anxiety scores compared to the control group who received normal antenatal treatment.
Dr James Newham, who carried out the research as a PhD student at Tommy’s Maternal and Fetal Health Research Centre at the University of Manchester, and is now a research associate at Newcastle University, said: “It is surprising this has never been looked at before, we have long believed that it works but no research had been done to back up the theory.
“We have now gone some way to prove that it can help. It was not a small effect either. This has the potential to really help mothers who are feeling anxious about their pregnancy.”
Professor John Aplin, one of the senior investigators in Manchester, and himself a long standing yoga teacher, said: “Yoga incorporates relaxation and breathing techniques with postures that can be adapted for pregnant women. Many women opt to practise yoga during their pregnancy but this is the first worldwide report on the effects of both single and multiple sessions of antenatal yoga on mood.”
The study, funded by baby charity Tommy’s, was carried out in Greater Manchester and looked at 59 women who were pregnant for the first time and asked them to self-report their emotional state. They were split into several groups, some of which took part in a yoga session a week for eight weeks, while the others just had normal pre-natal treatment. A single session of yoga was found to reduce self-reported anxiety by one third and stress hormone levels by 14%.  Encouragingly, similar findings were made at both the first and final session of the 8 week intervention.
Dr Newham added: “There is a growing body of evidence that maternal antenatal anxiety may increase the risk of pre-term delivery and the likelihood of giving birth to a low birth weight child. If we can reduce these risk factors, and perhaps reduce the rate of post-natal mood disorders in mothers and negative health outcomes in their offspring, then that can only be a good thing.”
Professor Aplin said: “The results confirm what many who take part in yoga have suspected for a long time. There is also evidence yoga can reduce the need for pain relief during birth and the likelihood for delivery by emergency caesarean section.
“Perhaps we should be looking at providing yoga classes on the NHS. It would be relatively cheap to implement, could help mothers and their children be healthier, as well as reducing the costs of longer term health care.”
Jacqui Clinton, Health Campaigns Director at Tommy’s said: “At least 1 in 10 women experience mental health problems during pregnancy, yet previous research from Tommy’s has shown that the stigma is so great, many women never get help for their feelings. This study shows that pregnant women may be able to use yoga to reduce feelings of stress, anxiety and depression, which in turn may help prevent them developing post-natal depression. We already know that pregnancy yoga can help improve physical health and strength on the run up to having a baby, and this new evidence shows that it may have important benefits for women’s emotional health too.”
ENDS

The paper entitled: “Effects of Antenatal Yoga on Maternal Anxiety and Depression: A Randomized Controlled Trial” in published in the Journal Depression and Anxiety on 1 May 2014.

For more information on this press release, a copy of the paper or to arrange an interview with the academics, please contact Alison Barbuti in The University of Manchester Press Office on 0161 275 8383 or email alison.barbuti@manchester.ac.uk or Sam Wood in the Newcastle University press office on 0191 208 7374, 07886 473 422 or e-mail sam.wood1@ncl.ac.uk
Some modules are disabled because cookies are declined. Accept cookies to experience the full functionality of this page. Learn more
ACCEPT COOKIES
We use cookies to optimize the website, no personal information is stored. Learn more
DECLINE COOKIES ACCEPT COOKIES