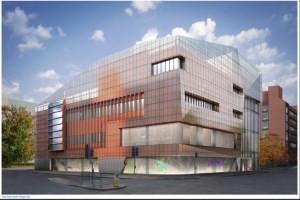 This is the first glimpse of the new £61m research institute into wonder material graphene, which is to be built at The University of Manchester.

The stunning, glass-fronted National Graphene Institute (NGI) will be the UK’s home of research into the world’s thinnest, strongest and most conductive material, providing the opportunity for researchers and industry to work together on a huge variety of potential applications.

It is hoped the centre will initially create around 100 jobs, with the long-term expectation of many thousands more in the North West and more widely in the UK.

The 7,600 square metre building will house state-of-the-art facilities, including two ‘cleanrooms’ – one which will take up the whole of the lower ground floor – where scientists can carry out experiments and research without contamination.

The Institute will also feature a 1,500 square metre research lab for University of Manchester graphene scientists to collaborate with their colleagues from industry and other UK universities.

Funding for the NGI will come from £38m from the Government, as part of £50m allocated for graphene research, and the University has applied for £23m from the European Regional Development Fund (ERDF). The NGI will operate as a ‘hub and spoke’ model, working with other UK institutions involved in graphene research.

Some of the world’s leading companies are also expected to sign up to work at the NGI, where they will be offered the chance to work on cutting edge projects, across various sectors, with Nobel Laureates and other leading members of the graphene team.

Graphene, isolated for the first time at The University of Manchester by Professor Andre Geim and Professor Kostya Novoselov in 2004, has the potential to revolutionise a huge number of diverse applications; from smartphones and ultrafast broadband to drug delivery and computer chips.

“Our researchers and scientists will be able to collaborate with colleagues from other universities and from some of the world’s leading companies, which can only serve to enhance scientific research.

“We are delighted that the Government have chosen to invest in graphene, which as the potential to change technology in so many ways.”

Professor Colin Bailey, Vice-President and Dean of the Faculty of Engineering and Physical Sciences, added: “The National Graphene Institute will be the world’s leading centre of graphene research, combining the expertise of University of Manchester academics with their counterparts at other UK universities and with leading global commercial organisations.

“The potential for its impact on the city and the North West is huge, and will be one of the most exciting centres of cutting edge research in the UK.”

Work is set to start on the five-story NGI, which will have its entrance on Booth Street East, in March, and is expected to be completed in early 2015.

Graphene images and more information are available from www.graphene.manchester.ac.uk