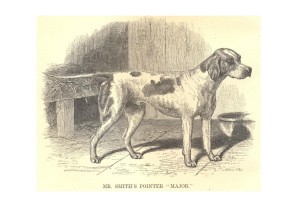 A description of the animal, found by the team in a now obscure 1865 edition of a Victorian journal called “The Field”, was the first attempt to define a dog breed standard based on physical form.

John Henry Walsh, who wrote under the pseudonym of ‘Stonehenge’, took the system of giving scores for different parts of the body from pigeon fanciers, paving the way for the pedigree dog breeds we know today.

The discovery will strike a chord with the dog owners taking part in this year’s Cruft’s dog show, starting this week (Thursday 7 March).

Stonehenge’s method was developed to solve the bitter disputes over the seemingly arbitrary decisions of judges at dog shows, which were fast gaining in popularity.

A dog might win a class at Birmingham one week and come last at a show in London a month later.

The owners of champion animals were increasingly able to command lucrative stud fees, ever since the first show of 1859, as well as cups and prize money of around 5 guineas.

In September 1865, Stonehenge published a classification for the Pointer which gave its head and neck 30 points, frame and general symmetry 25, legs and feet 20, quality and stern 15, and colour and coat 10. A ‘Mr Smith’, of Tettenhall in Wolverhampton, owned the dog.

A Mr H Gilbert, from Kensington, had sold the dog to a ‘Mr Smith’, of Tettenhall in Wolverhampton.

An article on a ‘Gordon Setter’ soon followed along with others on Clumber Spaniels, Norfolk Spaniels, Truffle Dogs and Fox Terriers. Walsh’s edited collection was published in 1867.

The team are based at the Centre for the History of Science, Technology and Medicine and the School of Arts, Languages and Cultures – both at the University.

Professor Michael Worboys, who heads the University’s Centre for the History of Science, Technology and Medicine, said: “The standard set by ‘Mr Smith’s Major’ must surely be one of the most important milestones in the six-thousand-year-old relationship between canines and man.

“As dogs came to be defined as ‘breeds’, they were bred for greater conformity to breed standards, which meant more inbreeding, and more health problems as dogs were bred from a smaller gene pool.

“Stonehenge’s classifications set in chain a process where dogs were re-imagined, redesigned and remade.”

Dr Julie-Marie Strange said: “Stonehenge was so impressed by ‘Major’ when he saw drawings of the dog – and heard it had won a prize at a Birmingham show – he devised the classification.

“There’s a historical theme in the way many of these breeds were created: for example, though bull baiting had been banned in 1830, the Bulldog was bred to form considered to be ideal for grappling with a bull, for example, a protruding lower jaw to grab the soft nose of bull.”

Dr Neil Pemberton said: “Before the 1860s, types of dogs were defined by what they did, not how they looked.  Pointers were gun dogs, valued and bred for their ability to find game and, though a recognisable type, came in a variety of sizes and colours.  But in the show ring they were expected to have a defined shape that aspired to the ideal set out in the breed standard.

“Major’ signalled a new age where dogs were increasingly bred for their form and from their pedigree. The emphasis on conformation to breed types spread rapidly to other countries, where British dog shows were emulated and British dogs imported as foundational breed stock.

“Though Stonehenge’s classification isn’t used today, it’s principle of defining a breed and judging by conformation will be the main criterion in the show ring at Cruft’s this week.”

An exhibition at the University’s Manchester Museum called ‘Breed: The British and their Dogs’, curated by the team, runs until April 14 this year. Entry is free. The exhibition focuses on six pedigree dogs and has been developed with The University of Manchester’s Centre for the History of Science, Technology and Medicine and supported by the AHRC.

Professor Worboys, Dr Strange and Dr Pemberton are all available for comment.