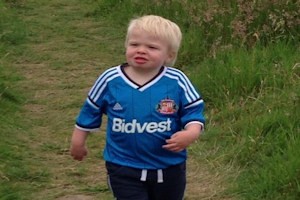 Researchers at The University of Manchester and The Royal Manchester Children’s Hospital have recruited the first child into a new study, which aims to evaluate the clinical effectiveness of a treatment developed in Manchester.

Funded by charity, The Society for Mucopolysaccharide Diseases (The MPS Society)*, the study could alter the lives of patients with Sanfilippo Disease – a fatal inherited condition which causes progressive dementia in children.

Jack Baird, who is four years old and from Sunderland, has the condition Sanfilippo Disease, also known as Mucopolysaccharidosis (MPS) III, which affects around one in 85,000 people in the UK.

Sanfilippo Disease is a progressive, genetic and life-threatening disease for which there is currently no effective treatment. The syndrome is diagnosed in childhood, with sufferers experiencing deafness, hyperactivity and behavioural problems, progressive developmental delay, and seizures during the later stages of the condition. The condition is usually fatal in late childhood or early adulthood.
“Jack’s condition means that he doesn’t speak much, is very hyperactive and has to be sedated to go to sleep. Jack isn’t very interested in toys, but he loves going to school, and out elsewhere. He enjoys going on the bus and going to Asda where everybody knows him.
“We found out about the clinical trial through The MPS Society, which was working with Dr Jones at The Royal Manchester Children’s Hospital. We got involved initially in 2012, by helping to fundraise for the study. We know that the treatment is not going to save Jack, but if the drug works we will have more time to make more memories, and memories are priceless,” explained Gemma Nelson, Jack’s mum.
The study conducted by the National Institute for Health Research (NIHR) / Wellcome Trust Manchester Clinical Research Facility at The Royal Manchester Children’s Hospital builds on initial research from The University of Manchester, which was funded by the MPS Society. It aims to establish whether high doses of the treatment Genistein Aglycone is effective in people with Sanfilippo Disease.
People with Sanfilippo Disease have too much of the substance heparan sulphate in their cells, particularly cells in the brain, because they lack the enzyme that usually breaks the heparan sulphate down. It is thought that Genistein Aglycone works by blocking the production of heparan sulphate and associated damage to the cells.
Genistein is a naturally occurring chemical found in soya beans. In the study the researchers will use a synthetic version, Genistein Aglycone, to maximise absorption through the gut.
Previous research in patients with Sanfilippo Disease has shown that low doses of Genistein reduce the heparan sulphate in the blood and urine, but are not sufficient to be effective in the brain1. However, research at The University of Manchester using higher doses of Genistein Alygone in the mouse model of Sanfilippo Disease has shown that this is effective in reducing neurodegeneration2,3.
Dr Brian Bigger, Chief Scientific Investigator for the study from The University of Manchester said: “It is fantastic to see a treatment we developed at The University of Manchester, in collaboration with clinicians, reach the point where we can test its effectiveness in patients. A US study published last year, demonstrated the safety of high doses of Genistein Alygone in patients with Sanfilippo Disease4.
“This new study is the first to test the effectiveness of the higher doses of Genistein, which are thought to be of the strength required to see an effect in the brain. We are looking forward to analysing the results of the trial and hope that the treatment will benefit patients.”
Dr Simon Jones, Consultant in Paediatric Inherited Metabolic Disease at Saint Mary’s Hospital, Manchester, who is leading the study explains: It’s important for us to undertake research in rare diseases, like Sanfilippo Disease, so that we can provide these patients with the best possible care. During the later stages of the disease, patients experience seizures, become wheelchair bound and can have trouble swallowing.
“This new study is open to children aged 2–15 years old. Patients taking part in the study will receive either Genistein Aglycone or placebo (an inactive substance that looks like the treatment) with food, over a period of 12 months.
After 12 months all children will receive Genistein Aglycone for a further 12 months”, adds Dr Jones, who is also Honorary Senior Lecturer at The University of Manchester.
Over the course of the study, patients will attend up to nine clinic visits where they will have the level of heparan sulphate in the spinal fluid measured, as well as undergoing physical examinations and other assessments. It is anticipated that the study will take around three years to complete.
“Sanfilippo Disease is rare, affecting about 150 children in the UK. The MPS Society is proud of its collaboration with The University of Manchester and The Royal Manchester Children’s Hospital, which will bring this important research to the clinic and the patient. The funds raised so far allow for 24 children to be on the Genistein clinical trial. We need to raise a further £120,000, so that another six children can be involved and I’d like to urge people interested in making a real difference to donate, however big or small, and get in touch with The MPS Society,” adds Christine Lavery, Chief Executive of The MPS Society, the major funder of the study.
The delivery of the study was supported by the National Institute for Health Research (NIHR) Clinical Research Network.

Dr Brian Bigger (available for interview by phone/in Brazil on Thursday 7th [BRT]; Friday 8th [09.00–12.00; BRT]; and 14–16th August [BRT])
To speak with Dr Brian Bigger, please contact: Alison Barbuti, Media Relations Officer, The University of Manchester (0161 275 8383; alison.barbuti@manchester.ac.uk)
To speak with Dr Simon Jones, please contact:
Emma Smith
0161 701 2679 / 0782 514 2219
Emma.smith@cmft.nhs.uk
Lucy Prosser
0161 701 0260 / 0782 514 2219
Lucy.prosser@cmft.nhs.uk
Patient and MPS Society (the patient is due to visit the Royal Manchester Children’s Hospital on Monday 11th August)
To speak with Jack Baird’s mum, an alternative patient representative, or Christine Lavery, Chief Executive of The MPS Society please contact: Charlotte Roberts, Communications Officer (0845 389 9901; c.roberts@mpssociety.org.uk)
References
1. de Ruijter, J., Valstar, M. J., Narajczyk, M., Wegrzyn, G., Kulik, W., Ijlst, L., . . . Wijburg, F. A. (2012). "Genistein in Sanfilippo disease: a randomized controlled crossover trial." Annals of neurology 71(1): 110-120. (http://www.ncbi.nlm.nih.gov/pubmed/22275257)
2. Malinowska M, Wilkinson FL, Bennett W, Langford-Smith KJ, O'Leary HA, Jakobkiewicz-Banecka J, Wynn R, Wraith JE, Wegrzyn G, Bigger BW (2009). “Genistein reduces lysosomal storage in peripheral tissues of mucopolysaccharide IIIB mice.” Mol Genet Metab. 98(3):235-42. doi: 10.1016/j.ymgme.2009.06.013. (http://www.ncbi.nlm.nih.gov/pubmed/19632871)
3. Malinowska, M., Wilkinson, F. L., Langford-Smith, K. J., Langford-Smith, A., Brown, J. R., Crawford, B. E., . . . Bigger, B. W. (2010). "Genistein improves neuropathology and corrects behaviour in a mouse model of neurodegenerative metabolic disease." PloS one 5(12): e14192. (http://www.plosone.org/article/info:doi/10.1371/journal.pone.0014192)
4. Kim, K. H., Dodsworth, C., Paras, A. and Burton, B. K. (2013). "High dose genistein aglycone therapy is safe in patients with mucopolysaccharidoses involving the central nervous system." Molecular genetics and metabolism 109(4): 382-385. (http://www.ncbi.nlm.nih.gov/pubmed/23845234)
About Sanflippo Disease
Central Manchester University Hospitals NHS Foundation Trust, The University of Manchester and The MPS Society have a long history of working with families affected by
Mucopolysaccharide Diseases and research into this area.
Dr Brian Bigger (The University of Manchester) and Christine Lavery (The MPS Society) will be speaking at the 13th International Symposium on Mucopolysaccharidoses and related disease (13th and 17th August in Costa Do Sauipe, Bahia, Brazil).
To donate towards the study call 0845 389 9901.
*To date around £376,000 has been raised for the study by the MPS Society in the UK (major funder) in partnership with:
Spanish MPS Society German MPS Society Swiss MPS Society Irish MPS Society New Zealand MPS Society Japanese MPS Society Austrian MPS Society Hong Kong MPS Society French MPS Society National MPS Society USA GEM Appeal
Manchester Centre for Genomic Medicine is a partnership between the CMFT and the The University of Manchester, and represents one of the most comprehensive units in Europe. An integrated academic and service department based at CMFT, it provides clinical and diagnostic services for inherited disorders to a population of over six million individuals and leads an international programme of research.
The Society for Mucopolysaccharide Diseases (The MPS Society) is the leading patient organisation in the world supporting over 1200 families in the UK and many more further afield whose children have an MPS or related disease. The MPS Society provides a pioneering advocacy service to individual families as well as fund innovative and life changing clinical and academic research. As a registered charity the Society is entirely supported by voluntary donations and fundraising.
GEM Appeal (Genetics, Enzymes, Metabolics) Appeal was formed by Karen Johnson, mother of two sons who were being treated by Professor Ed Wraith at The Royal Manchester Children’s Hospital for Mucopolysaccharidosis type II, also known as Hunter Syndrome. Sadly, Karen’s two sons both died aged 12 years around the same time that The GEM Appeal raised its first £250,000 towards extending the Willink Unit at the Royal Manchester Children’s Hospital and funding research in this area.
The NIHR/Wellcome Trust Manchester Clinical Research Facility (MCRF) is a purpose-built unit focused on supporting experimental medicine research helping to bring new drugs and medical devices into patient care. The facility is based at Central Manchester University Hospitals NHS Foundation Trust and receives funding from the National Institute for Health Research (NIHR). The MCRF offers state-of-the-art equipment and facilities for adult and children's studies, and has a team of specialist research nurses and support staff. A satellite unit the Children’s CRF in the Royal Manchester Children’s Hospital is at the cutting edge of research into inherited renal, metabolic, and hearing disorders.
The National Institute for Health Research (NIHR) is funded by the Department of Health to improve the health and wealth of the nation through research. Since its establishment in April 2006, the NIHR has transformed research in the NHS. It has increased the volume of applied health research for the benefit of patients and the public, driven faster translation of basic science discoveries into tangible benefits for patients and the economy, and developed and supported the people who conduct and contribute to applied health research. The NIHR plays a key role in the Government’s strategy for economic growth, attracting investment by the life-sciences industries through its world-class infrastructure for health research. Together, the NIHR people, programmes, centres of excellence and systems represent the most integrated health research system in the world.
NIHR Clinical Research Network
We provide researchers with the practical support they need to make clinical studies happen in the NHS, so that more research takes place across England, and more patients can take part. This practical support includes: Reducing the “red-tape” around setting up a study Enhancing NHS resources, by funding the people and facilities needed to carry out research “on the ground” Helping researchers to identify suitable NHS sites, and recruit patients to take part in research studies Advising researchers on how to make their study “work” in the NHS environment.
Some modules are disabled because cookies are declined. Accept cookies to experience the full functionality of this page.
ACCEPT COOKIES
We use cookies to optimize the website, no personal information is stored. Learn more
DECLINE COOKIES ACCEPT COOKIES