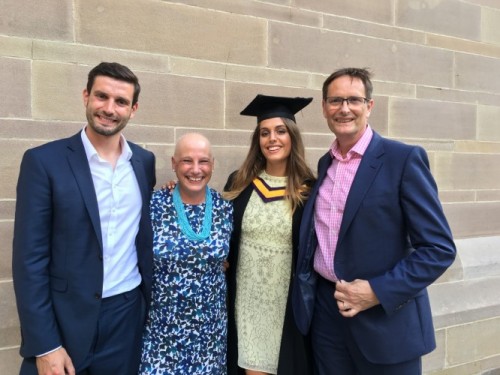 What’s more special for a parent than having two children graduating from the same university in one year?

Well, what about if they are graduating from the same University where their parents met, fell in love and graduated from over 30 years before. Or the fact that your medical student son found a congenital heart condition that had been missed by Doctors for years? This is just part of the extraordinary graduation story of the FitzPatrick family.

This summer, brother and sister, Daniel and Laura FitzPatrick, are graduating from The University of Manchester. Daniel, 24, has been studying medicine and graduated earlier this month whilst his younger sister, Laura, 21, is graduatin today (Wednesday 20th July), after studying Linguistics and editing the popular online student magazine, The Tab.

But before the siblings walked the graduation trail it was their parents, Liam and Juliet, both 54, who tread the corridors of the University. In 1981, the couple met over a ham sandwich in their first week of study at Manchester and have been together ever since. Now, more than 30 years after they first met, they are returning to their Alma Mater to see their own children graduate from the very same Whitworth Hall where they graduated three decades earlier.

Dad, Liam, a Communications Consultant based in Hertfordshire, studied Economics at Manchester, whilst sports administrator mum, Juliet, studied History. She said: "It’s been an amazing experience. Seeing our kids come through all those years of study and fully take part in the University and student life of Manchester. But it is also a bit odd sitting in the same hall all these years later where we sat exams and graduated ourselves.”

The FitzPatrick’s graduation story is all the more incredible as earlier this year there was a real chance that neither Liam nor Juliet would make it to the ceremonies due to very different but equally serious health issues for them both.

In February, Juliet was diagnosed with breast cancer and then just three days later Liam was told he needed open heart surgery on heart condition his son Daniel had found three years earlier when practicing his new found medical skills.

Liam added: “After listening to my chest Daniel turned all professional and suggested that I see a doctor. It turned out that I had a congenital heart condition that no one had ever spotted before. My doctors said I’d need an operation at some stage but that they would monitor the situation; the implication was that nothing much would happen for several years, possibly decades.”

Liam added: "This year Juliet has been through the process of a major operation and chemotherapy and I am recovering from open heart surgery. So there were moments in the last few months when one or both of us feared we might not be around at the graduation. But everything is going brilliantly now – we’re recovering OK. And I for one am grateful that the medical school taught my son how to listen to a heart!"