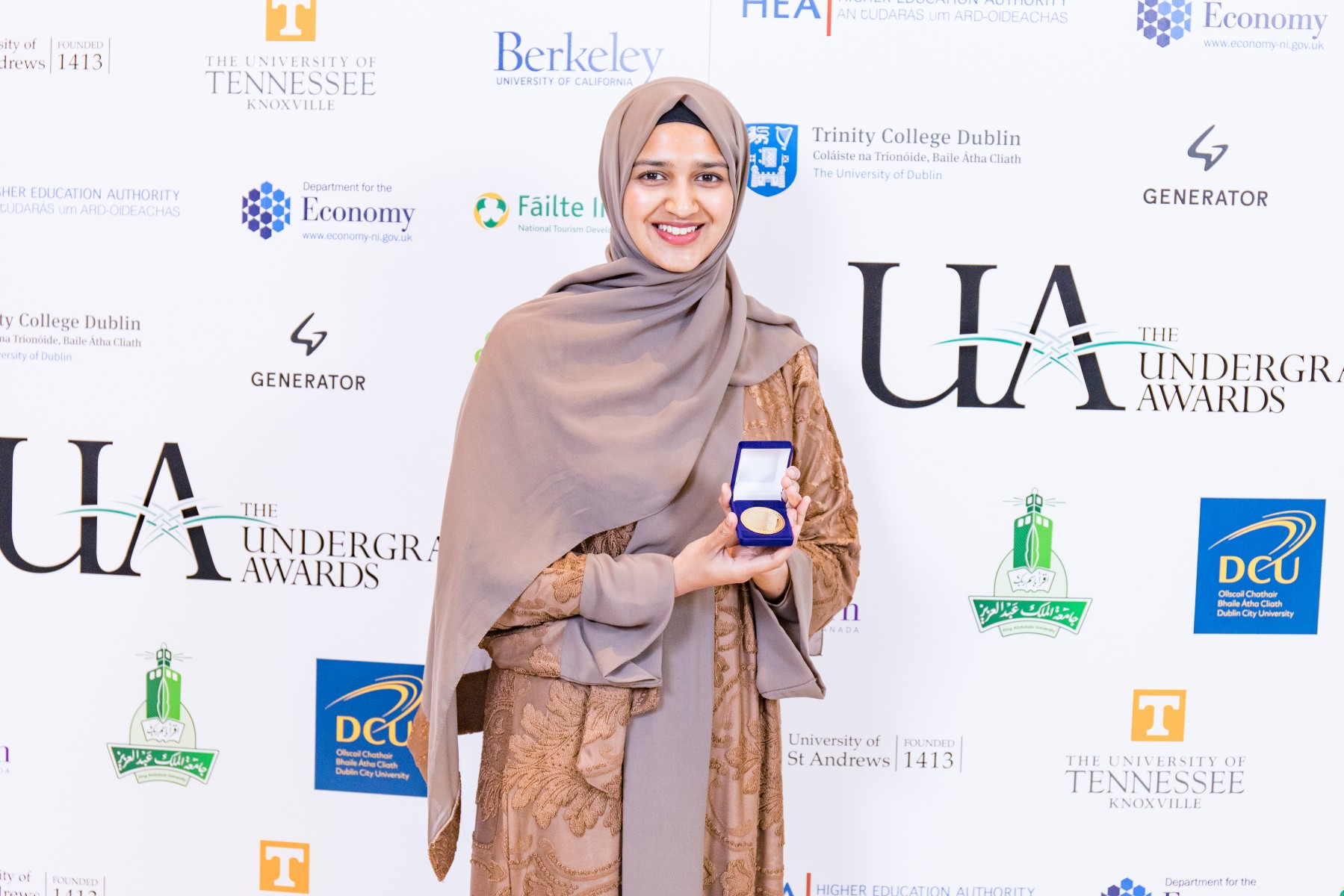 A University of Manchester student has been placed among the best in the world for her research project which investigated how women in Asia are using literacy as a way of protecting their families from disease and poor living standards.

Farhana Choudhury was a global winner in the ‘education’ category at the Undergraduate Awards, an international competition described as ‘the junior Nobel Prize’ which is entered by thousands of students from around the world.

Her entry was a paper entitled, ‘A discussion of literacy as a vehicle which enables women from urban Afghanistan and rural Nepal to overcome societal challenges and participate in society’ and she was honoured for her achievement alongside other participants from The University of Manchester at a ceremony on 5 December.

To carry out her research, Farhana used statistics and official reports to find out how women were learning to read and write in these countries, so that they could access healthcare information and knowledge relevant to their social realities, and improve their lives.

This has had the effect of reducing child mortality as women are able to make their own life decisions and put them into effect, which includes the increased involvement in the health of their children. She also found that literacy enables empowerment amongst women who ordinarily would have been cast aside.

Women also utilised literacy to overcome societal challenges, such as the ban on female education imposed by the Taliban by setting up secret underground schools in their homes.

Farhana, who is from Oldham, was studying an undergraduate degree in BA (Hons) English Language for Education at the time of the project and has now progressed to a master’s degree MEd Psychology of Education.

Farhana said: “I didn’t know much about these countries when I started my project but I wanted to find out how, in societies which are often male-dominated, women are using literacy to improve their lives and the ways in which literacy provides them with empowerment and freedom that they have been denied.

My lecturer Dr Susie Miles was incredibly supportive, and I spent a lot of time in the library using the resources there. There is a lot of emphasis put on research in this university - I really like that, as I fully believe in the power that research has to make the world a better place for those around us.

Farhana has also been inspired by her studies to take action closer to home. “I know this university is big on social responsibility and I am too. I am in the process of starting a joint project with the Federation of Student Islamic Societies and the University of Manchester Islamic Society where volunteers go into schools located in ‘socially deprived’ areas and try to inspire students to raise their aspirations."

The University also had ten highly commended entrants in the Undergraduate Awards this year, who along with Farhana, beat off competition from thousands of their peers around the world. They are:

The award entries are co-ordinated through the Learning through Research initiative which gives undergraduates the chance to get involved in research activities as part of a structured and supported learning process. It is co-ordinated by Professor Kersti Börjars, Vice-President for Teaching, Learning and Students.

This global award is a great achievement for Farhana, and is richly deserved. At the University, we believe that we have to do our utmost to help support talented students like her to realise their potential. Building skills to research the subjects that they are passionate about is a very important part of that process.