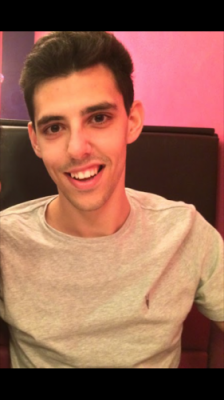 A University of Manchester psychology student who graduates on 21 July has used part of his studies to benefit other people with Parkinson’s by taking part in a project to help them improve their movement.

Jordan Webb, who’s 21 and from Liverpool, has completed his BSc Psychology and graduates alongside thousands of other students during the University’s graduation fortnight in July.

As well as his degree he will also receive the Lynn Young Prize in psychology for overcoming challenging circumstances, as a result of his hard work to complete his degree and his third year project which aims to support people with Parkinson’s in their own homes.

Working with psychology researchers in the University’s Body Eyes and Movement (BEAM) lab, Jordan ran a focus group with patients, in order to test the feasibility of a home-based intervention which could be delivered as an app or on computers or TVs. The idea is for people to watch videos which show them how to carry out tasks which they often struggle with, such as washing, brushing their teeth or doing up buttons.

He said: “Personally, I know that getting out of the house to visit health workers is very challenging, so this project is all about testing whether or not developing a small series of exercises at home could improve quality of life more effectively.”

Parkinson's disease is a neurodegenerative brain disorder that usually begins to manifest in old age. The average age of onset is around 70 and around 160 per 100,000 people are likely to develop the disease. It causes symptoms such as tremors, speech issues, freezing episodes, cramping, difficulties initiating movements, difficulties multi-tasking and impaired gait and balance.

The project in particular was a real highlight of my studies.  I was able to bring a patient’s outlook to the research and I can definitely see the benefits that this will have for others who will be able to gain independence and improve their day to day lives once the final application is ready

Jordan was diagnosed with Parkinson’s aged 17, but still achieved A level results of ABB. With the support of his school teachers he gained a place at The University of Manchester where he was often forced to miss lectures as a result of his illness. He also has difficulty writing, particularly in exam situations, but the University was able to support him in this by making podcasts and other help available and he graduates on 21st July.

His project supervisor, senior lecturer Dr Ellen Poliakoff said: “It was very inspiring for me as a researcher to work with someone affected by the condition and Jordan’s work contributed to our ESRC-funded project on Parkinson’s and imitation. We have already presented the work that Jordan contributed to at a research workshop and as a journal article.”

Jordan has now applied to do a master’s degree in order to carry on his pursuit of a career as a psychologist.

He added: “The project in particular was a real highlight of my studies. I was able to bring a patient’s outlook to the research and I can definitely see the benefits that this will have for others who will be able to gain independence and improve their day to day lives once the final application is ready.”