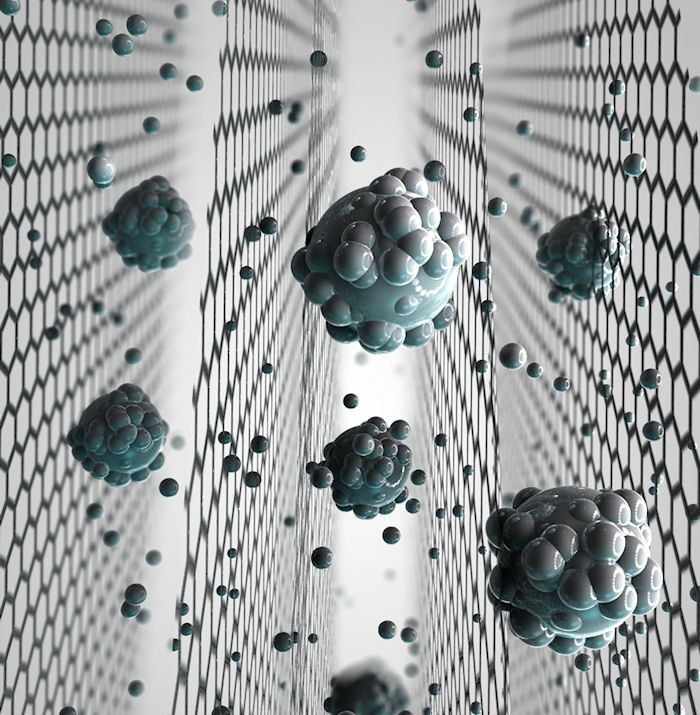 Graphene-oxide membranes have attracted considerable attention as promising candidates for new filtration technologies. Now the much sought-after development of making membranes capable of sieving common salts has been achieved.

The new findings from a group of scientists at The University of Manchester were published today in the journal Nature Nanotechnology. Previously graphene-oxide membranes have shown exciting potential for gas separation and water filtration.

Graphene-oxide membranes developed at the National Graphene Institute have already demonstrated the potential of filtering out small nanoparticles, organic molecules, and even large salts. Until now, however, they couldn’t be used for sieving common salts used in desalination technologies, which require even smaller sieves.

Previous research at The University of Manchester found that if immersed in water, graphene-oxide membranes become slightly swollen and smaller salts flow through the membrane along with water, but larger ions or molecules are blocked.

The Manchester-based group have now further developed these graphene membranes and found a strategy to avoid the swelling of the membrane when exposed to water. The pore size in the membrane can be precisely controlled which can sieve common salts out of salty water and make it safe to drink.

Realisation of scalable membranes with uniform pore size down to atomic scale is a significant step forward and will open new possibilities for improving the efficiency of desalination technology.

When the common salts are dissolved in water, they always form a ‘shell’ of water molecules around the salts molecules. This allows the tiny capillaries of the graphene-oxide membranes to block the salt from flowing along with the water. Water molecules are able to pass through the membrane barrier and flow anomalously fast which is ideal for application of these membranes for desalination.

Professor Rahul Nair, at The University of Manchester said: “Realisation of scalable membranes with uniform pore size down to atomic scale is a significant step forward and will open new possibilities for improving the efficiency of desalination technology.

“This is the first clear-cut experiment in this regime. We also demonstrate that there are realistic possibilities to scale up the described approach and mass produce graphene-based membranes with required sieve sizes.”

Mr. Jijo Abraham and Dr. Vasu Siddeswara Kalangi were the joint-lead authors on the research paper: “The developed membranes are not only useful for desalination, but the atomic scale tunability of the pore size also opens new opportunity to fabricate membranes with on-demand filtration capable of filtering out ions according to their sizes.” said Mr. Abraham.

By 2025 the UN expects that 14% of the world’s population will encounter water scarcity. This technology has the potential to revolutionise water filtration across the world, in particular in countries which cannot afford large scale desalination plants.

It is hoped that graphene-oxide membrane systems can be built on smaller scales making this technology accessible to countries which do not have the financial infrastructure to fund large plants without compromising the yield of fresh water produced.