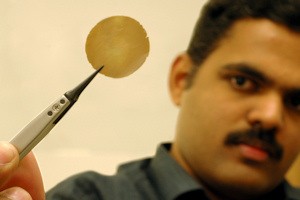 Water filters allowing precise and fast sieving of salts and organic molecules have been revealed by University of Manchester scientists.

Graphene has proven itself as a wonder material with a vast range of unique properties. Among the least-known marvels of graphene is its strange love affair with water.

Graphene is hydrophobic – it repels water – but narrow capillaries made from graphene vigorously suck in water allowing its rapid permeation, if the water layer is only one atom thick – that is, as thin as graphene itself.

This bizarre property has attracted intense academic and industrial interest with intent to develop new water filtration and desalination technologies.

One-atom-wide graphene capillaries can now be made easily and cheaply by piling layers of graphene oxide – a derivative of graphene – on top of each other. The resulting multilayer stacks (laminates) have a structure similar to nacre (mother of pearl), which makes them also mechanically strong.

Two years ago, University of Manchester researchers discovered that thin membranes made from such laminates were impermeable to all gases and vapours, except for water. This means that even helium, the hardest gas to block off, cannot pass through the membranes whereas water vapour went through with no resistance.

Now the same team led by Dr Rahul Nair and Prof Andre Geim has tested how good the graphene membranes are as filters for liquid water. The results appear in the latest issue (Feb 14, 2014) of Science.

The researchers report that, if immersed in water, the laminates become slightly swollen but still allow ultrafast flow of not one but two monolayers of water.

Small salts with a size of less than nine Angstroms can flow along but larger ions or molecules are blocked. Ten Angstroms is equivalent to a billionth of a metre.

The graphene filters have an astonishingly accurate mesh that allows them to distinguish between atomic species that are only a few percent different in size.

On top of this ultraprecise separation, it is also ultrafast. Those ions that can go through do so with such a speed as if the graphene membranes were an ordinary coffee filter.

The latter effect is due to a property that the Manchester scientists call “ion sponging”. Their graphene capillaries suck up small ions as powerful hoovers leading to internal concentrations that can be hundreds of times higher than in external salty solutions.

Dr Nair said: “The water filtration is as fast and as precise as one could possibly hope for such narrow capillaries. Now we want to control the graphene mesh size and reduce it below nine Angstroms to filter out even the smallest salts like in seawater. Our work shows that it is possible.”

Dr Irina Grigorieva, a co-author of the study, added: “Our ultimate goal is to make a filter device that allows a glass of drinkable water made from seawater after a few minutes of hand pumping. We are not there yet but this is no longer science fiction”.

The work was done in collaboration with a group led by Hengan Wu from Chinese Academy of Sciences who carried out extensive computer simulations to understand the filtration mechanism.

Images of graphene and more information is available from www.graphene.manchester.ac.uk