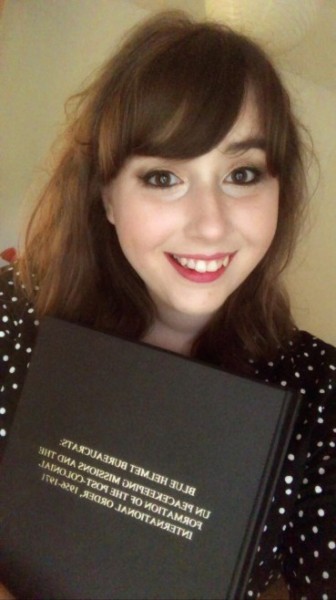 During her PhD, Margot studied the history of United Nations peacekeeping missions during the Cold War period and the colonial legacies perpetuated by the missions. Her thesis 'Blue Helmet Bureaucrats: UN Peacekeeping Missions and the Formation of the Post-Colonial International Order, 1956-1971' was supervised by Drs Róisín Read, Laure Humbert, Eleanor Davey, and Steven Pierce. Margot explained where her idea for her thesis began: "I was originally motivated to research this topic following the controversial French 'Operation Sangaris' mission in CAR from 2013-2016. Press about this mission prompted me to ask questions about the use of force, humanitarianism, and colonial legacies in the context of international 'peacekeeping' missions in the Global South.

“My PhD project evolved out of conversations with Eleanor and other academic friends about examining these questions historically. My PhD was a history of United Nations peacekeeping missions during the height of decolonisation (1956-1971). It adopted a comparative approach to the first four armed UN missions: UNEF (Sinai and Gaza), ONUC (Congo), UNTEA (West Papua), and UNFICYP (Cyprus)."

Margot was also nominated for Postgraduate Researcher of the Year in the President’s Distinguished Achievement Awards. Supervisors, Dr Róisín Read, Lecturer in Peace and Conflict Studies at HCRI and Dr Laure Humbert Lecturer in Modern History, who nominated her for this award said:

“Her PhD examiners were especially impressed by her imaginative use of sources and the breadth of secondary literature engaged with. Her hugely ambitious thesis covered multiple contexts and required research in a variety of archives in the UK and the US, as well as detailed historiography on all four of her case study contexts and the United Nations. That she was able to encompass such breadth and depth in her research is impressive. Furthermore, completing her studies in under three years while also producing two articles published with leading global history journals and building a research reputation for herself through presenting at conferences, summer schools, and invited talks is truly exceptional. The research itself spans global History, decolonisation, and international relations and makes important contributions to all three fields.

“Margot has been a vital and enthusiastic member of the research community at HCRI and beyond in the University. Alongside her research activities, she has also been a valued teaching colleague in HCRI and the History department. She has translated her skills in interdisciplinary research into a valuable teaching tool and has taught across a range of subjects, with excellent student and staff feedback. It has been a pleasure to help guide Margot through her PhD, and we cannot think of anyone more deserving of recognition for her contributions."

Margot currently works as Postdoctoral Research Fellow at the University of Exeter’s Leverhulme-funded project 'Warnings from the Archive: A Century of British Intervention in the Middle East', alongside colleagues Dr Owen Thomas and Professor Catriona Pennell. The project compares the Mesopotamia Commission (1917) and the Iraq 'Chilcot' Inquiry (2009-2016), examining how these two inquiries were conducted and the political culture of learning lessons.

She said: “My team and I are deconstructing how inquiries received and produced knowledge, therefore influencing how contemporaries narrativised or remembered the intervention. Rather than focusing on why the interventions failed, we want to centre how particular lessons came to be foregrounded and promoted by these inquiries.”

Find out more about Margot’s PhD research and her current research project.