HCRI's video response to attacks on Save the Children, Afghanistan

The Humanitarian Conflict and Response Institute and its affiliates have produced a video in response to the January 2018 attacks on Save the Children in Jalalabad, Afghanistan.

On the 24th January 2018, militants affiliated with Islamic State launched an attack on a Save the Children office in Jalalabad, a city in eastern Afghanistan, killing six people including four Save the Children staff, and injuring 27.

At HCRI’s Annual Careers in Humanitarianism Day on Friday 2nd February, three of our speakers responded to this attack with messages of solidarity.

Gareth Owen is the Humanitarian Director of Save the Children and an alumnus of the University of Manchester. He stated that this attack is ‘a grim reminder of the risks that our staff take every day around the world. It is indeed a crime for humanitarian staff, who are doing nothing except trying to make the lives better of everybody affected by poverty and disaster, to have to pay the ultimate sacrifice in such a violent way…I want to pay tribute to their courage, and we continue to fight the world over in their name.’

Nancy Claxton, Senior Officer of Health Promotion for the International Federation of Red Cross Red Crescent Societies (IFRC) in Geneva, stated that IFRC have had a number of staff and volunteers killed over the last several years.

IFRC’s Health Care in Danger (HCID) initiative aims to address the issue of violence against patients, health workers, facilities and vehicles, and ensuring safe access to and delivery of health care in armed conflict and other emergencies. This programme is working with local governments to help them pass laws to criminalise the targeting of aid workers.

Part of HCRI’s role as a World Health Organisation Collaborating Centre is researching attacks on humanitarian health care and health providers. Bertrand Taithe, Director of HCRI, stated: ‘this is something that is simultaneously a research object for [HCRI], but is a very significant area of concern, and an area in which we want to express solidarity with all humanitarians who are a victim of violence.’ 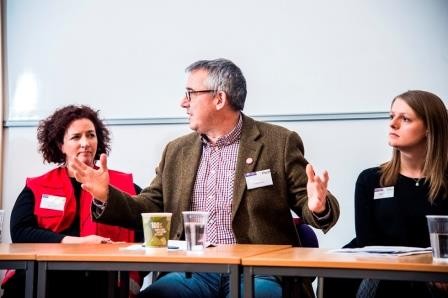 In November 2015, HCRI held a panel discussion after the airstrikes on the MSF hospital in Kunduz, Afghanistan: ‘The oldest war crime in the book? Humanitarian aid under fire.’ Professor Bertrand Taithe wrote a blog post alongside this.

The theme for World Humanitarian Day 2017 was ‘Not a Target’. This campaign sought to raise awareness about civilians and humanitarian aid workers caught in armed conflict.

Gareth Owen (OBE) is the Humanitarian Director of Save the Children. Gareth has played a pivotal role in the strategic growth of Save the Children’s humanitarian activities over the past decade and today he leads a diverse department of more than 200 humanitarian staff. Save the Children and HCRI have formed a strategic partnership, enabling Save the Children to draw upon HCRI’s research capacity and scholarly expertise, and giving HCRI opportunities to conduct field research that directly informs humanitarian policy and practices. Professor Bertrand Taithe studied at the Sorbonne with Professor François Crouzet and began his career as a historian of urban sociology. He later moved into the history of medicine and sexuality and is particularly interested in the history of humanitarian aid. Since 2009 Bertrand has been a founding member and executive director of the Humanitarian and Conflict Response Institute (HCRI) which combines the research interests of colleagues in the humanities and opens a dialogue with humanitarian workers and medical practitioners.

Nancy Claxton is the senior officer of health promotion in the community and emergency health department of International Federation of Red Cross Red Crescent Societies (IFRC) in Geneva. She has more than 27 years of experience in brain-based strategies of teaching, learning and communicating in the areas of health promotion, behaviour change and development work. Nancy is an alumnus of HCRI, and is involved in curriculum development for our Online MSc in Global Health.