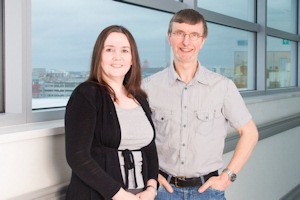 A commonly-used HIV drug has been shown to kill-off the human papilloma virus (HPV) that leads to cervical cancer in a world-first clinical trial led by The University of Manchester with Kenyatta National Hospital (KNH) in Nairobi.

Drs Ian and Lynne Hampson, from the University’s Institute of Cancer Sciences and Dr Innocent Orora Maranga, Consultant in Obstetrics and Gynaecology at KNH in Nairobi examined Kenyan women diagnosed with HPV positive early stage cervical cancer who were treated with the antiviral HIV drug lopinavir in Kenya.
The study looked at 40 women with both high and low-grade pre-cancerous disease of the cervix and the antiviral drug, normally used orally to treat HIV, was self-applied directly to the cervix as a pessary.
The results, due to be presented at two international scientific conferences later this month and next, showed a high proportion of women diagnosed with HPV positive high-grade disease returned to normal following a short course of the new treatment.
The findings build on previous peer-reviewed laboratory based research carried out by Drs Hampson and will be submitted to a journal soon. They have been described by an independent leading specialist in gynaecological cancer as very impressive.
The 40 women, who were all HPV positive with either high-grade, borderline or low grade disease, were treated with one capsule of the antiviral drug twice a day for 2 weeks. Repeat cervical smears showed a marked improvement within one month of the treatment although after three months, there was a definite response. Out of 23 women initially diagnosed with high-grade disease, 19 (82.6%) had returned to normal and two now had low-grade disease giving an overall positive response in 91.2%.of those treated. Furthermore the 17 women initially diagnosed with borderline or low-grade disease also showed similar improvement.
Photographic images of the cervix before and after treatment showed clear regression of the cervical lesions and no adverse reactions were reported.
Dr Ian Hampson said: “For an early stage clinical trial the results have exceeded our expectations. We have seen women with high-grade disease revert to a normal healthy cervix within a comparatively short period of time.
“We are convinced that further optimisation of the dose and treatment period will improve the efficacy still further.
“It is our hope that this treatment has the potential to revolutionise the management of this disease most particularly in developing nations such as Kenya.”
Cervical cancer is caused by infection with human papilloma virus (HPV) and is more than five times more prevalent in East Africa than the UK. In many developing countries, HPV-related cervical cancer is still one of the most common women’s cancers accounting for approximately 290,000 deaths per year worldwide. The same virus also causes a significant proportion of cancers of the mouth and throat in both men and women and this disease is showing an large increase in developed countries, such as the UK, where it is now more than twice as common as cervical cancer.
Dr Lynne Hampson said: “Current HPV Vaccines are prophylactics aimed at preventing the disease rather than curing or treating symptoms. Other than surgery, as yet there is no effective treatment for either HPV infection or the pre-cancerous lesion it causes which is why these results are so exciting.
“Further work is needed but it looks as though this might be a potential treatment to stop early stage cervical cancer caused by HPV.”
On a global scale HPV is the most common sexually transmitted disease.  Although in the developed world vaccination programmes against HPV are well underway, these are not effective in women already infected with the virus. The current vaccines do not protect against all types of HPV and they are expensive, which can limit their use in countries with low resources.
The researchers believe their findings offer a potential cheap and preferably self-administered treatment that could eliminate early-stage HPV infections before these have developed into cancers would therefore have distinct health advantages. Approximately 300,000 women are dying from cervical cancer per annum which is equivalent to 800 per day, one every two minutes mostly in low resource settings.
The research has been backed by Lord Saatchi, whose wife novelist Josephine Hart died of ovarian cancer and has submitted a Private Member’s Medical Innovation Bill to Parliament which he argues would promote “responsible” innovation for medics to try new treatments without the fear of negligence claims. The bill comes amid claims there is currently an estimated average time lag of 17 years for a new treatment or research evidence to reach clinical practice in the UK.
Lord Saatchi said: “What Drs Lynne and Ian Hampson have done is amazing – a classic case of innovation. The fact that they needed to run their trial in Nairobi and that even now there is no guarantee the treatment will be available in the UK any time soon, is a source of immense frustration.”
Dr Ian Hampson added: “This is not something we could have done in the UK due to the associated costs and red tape. We have full ethical approval in Kenya and chose to conduct the trial there because of the extreme need for a self-applied treatment for early stage cervical cancer.

“During the trial we provided 820 women with free cervical smear testing in addition to a range of other free medical tests that are not routinely available in Kenya. This was essential in order to identify women with HPV related cervical disease so that we could treat them with lopinavir. It is very significant that during this process we also identified five women who already had invasive cervical cancer and these were immediately referred for surgery.”
The research was funded by the UK Philanthropist Mr Ken Chorlton, the Caring Cancer Trust, United in Cancer Charitable Trust, The Humane Research Trust, Quest Cancer, the Cancer Prevention Research Trust and Hologic.
Professor Pierre Martin-Hirsh, Consultant in Gynaecological and Oncologist and Associate Editor in Chief, the British Journal of Obstetrics and Gynaecological, has described the research as very impressive.
ENDS

Copies of the international conference presentation with stats and graphs are available on request.
The research findings are due to be presented at the Gynaecolgical Oncology Forum in Egypt on 27th February 2014 and the International Conference on Urban Health in Manchester on 5th March 2014.