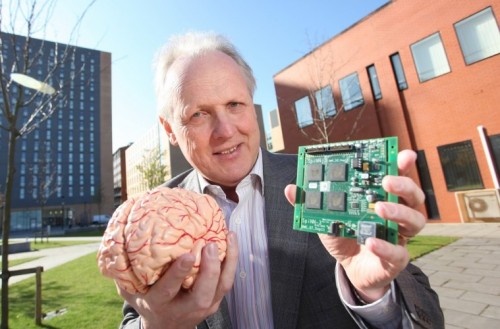 A flagship project which launched a range of prototype computer platforms to support brain research - including one based at The University of Manchester - has just received an €89 million boost from the European Commission.

The ‘Human Brain Project’ is made up of six new informatics-based platforms across Europe which aim to accelerate scientific understanding of the human brain, make advances in defining and diagnosing brain disorders, and develop new brain-like technologies. The platforms are designed to help researchers advance faster and more efficiently by sharing data and results, and by exploiting advanced ICT capabilities. The platforms should enable closer collaboration between scientists to create more detailed models and simulations of the brain.

The new funding was agreed following a successful review, in which the Human Brain Project was praised for making significant progress during its first phase (October 2013-March 2016).

We are very pleased that the funding for the next phase of the Human Brain Project has been confirmed, enabling us to continue to offer the SpiNNaker platform to our growing international user community and to progress the development of a second generation machine.

Thomas Skordas, Acting Director of the European Commission Digital Excellence and Scientific Infrastructure Directorate, said: “The Human Brain Project is now ready and well-prepared to begin its next phase. We have established the right basis for the Project to make significant progress in the coming two years towards reaching its overall goals”.