Ideas were flying at a three-day event to mark the 200th anniversary of the Peterloo massacre in Manchester, which brought thought-leaders from the arts together to discuss the theme ‘Romanticism now and then’. 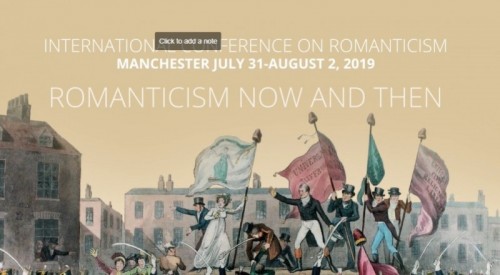 On 31 July - 2 August 2, 184 delegates from 20 countries participated in the event, held mainly at the Friends' Meeting House in Manchester city centre.

Keynotes by Marlene Daut (University of Virginia) and Anne-Lise François (UC Berkeley) concerned the timely topics of Haitian Romanticism and ecological poetics in the age of the anthropocene, and were held at the Midland Hotel and the Whitworth Art Gallery.

An open conversation generated ideas about what changes should be made to how we do conferences in light of ecological crisis and eight thought-provoking seminars were given by leading international scholars on a range of topics across the three days, alongside some 60 panels and roundtable sessions.

The conference culminated in a plenary panel of leading scholars discussing Peterloo in its local and colonial contexts, followed by a reception event hosted by HOME.

In addition, accolades were awarded, including the Lore Metzger Prize, which was awarded to Alice Rhodes for the best paper by a graduate, and the Jean-Pierre Barricelli Prize for the best book published on Romanticism in the last year was given to Richard Sha.

Many generous sponsors helped make ICR Manchester 2019 possible: Creative Manchester; The School of Arts, Languages, and Cultures; SEL: Studies in English Literature 1500-1900; The Byron Society; The John Rylands Research Institute; Essays in Romanticism; Romanticism on the Net; and the Centre for Interdisciplinary Research in Arts and Languages at the University of Manchester.